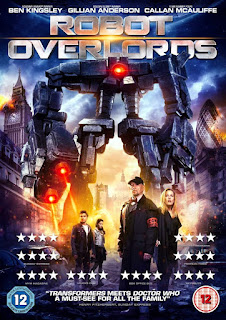 A group of kids hold the key to mankind’s future in Jon Wright’s sci-fi thriller “Robot Overlords” which hits UK Digital HD outlets July 24th ahead of its DVD/BD release in August from Signature entertainment.

Set in the UK in the not too distant future, the earth has been conquered by a race of advanced alien robots, who claim they wish to study mankind. Whilst they conduct their “studies”, Earth is essentially under martial law. Citizens are confined to their homes 24 hours a day, and have implants behind their right ear which informs their robot masters if they venture outside (the penalty for non-compliance is of course death).

The only exceptions to this rule are a group known as the volunteer corps, who deliver food parcels and supplies to the people under curfew and keep the mains services going. When a group of kids find that a brief electric shock neutralises the implants, allowing them to venture outside undetected, they head off into the country looking for a rumoured group of resistance fighters. But when one of them discovers his malfunctioning implant allows him to control nearby robots, the group find they’ve got a real chance of striking back against their robot overlords…

The special effects were extremely good for what was obviously a low budget movie, though the robot’s ships were a little too similar to Borg cubes for my liking. Plus, whilst the large patrol robots looked pretty impressive, the Android “mediator” looked kind of goofy and just didn’t work for me. But overall I did enjoy this and thought it was action packed and great fun, even though it’s premise was perhaps a little far fetched.

The only thing I will say, is this seems to be aimed pre-dominantly at younger viewers. The main focus being on these young lads trying to escape their town and finding this group of freedom fighters.  Director Jon Wright seemed to think this is an original idea, though I found it was rather reminiscent of John Christopher’s “Tripods” books, not that that’s a criticism, just an observation.

The DVD I was sent to review came packed with the following extras.

Making of feature (23mins) - featuring behind the scenes footage and interviews with the cast and crew.

VFX feature (6mins) – a look at how the CGI effects were developed and intergrated into the movie.