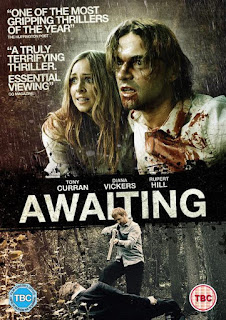 Three-time Award winner at the 2015 Horrorant Film Festival ‘Fright Nights’ and premiering at this year’s FRIGHTFEST, Bulldog Film Distribution is pleased to announce the UK release of AWAITING, available digitally and on DVD from 7th September 2015; pre-order now from Amazon.

Morris (Tony Curran - Blade II, Underworld: Evolution, Thor II) is a recluse with psychotic tendencies, whose life changes when his innocent daughter Lauren (Diana Vickers – yes, her off the X-factor) rescues one of his victims and befriends him. Jake (Rupert Hill – Entity, TVs Coronation Street), an ordinary businessman, soon realises that he is stranded and his presence in the house gradually reveals unexpected and dark mysteries from the past.

Speaking about the film, writer and director Mark Murphy commented, “AWAITING is a psychological thriller, with a seriously dark undertone and the capacity to give viewers a real thrill and fright. As the end credits roll, the audience will be left stunned, shocked and shaken.”
The film will be released, following it's UK premiere at this years Frightfest, on DVD and digitally September 7th.
View the trailer on YouTube
Pre-order the UK DVD from Amazon.co.uk
Posted by Dark Angel at 16:21