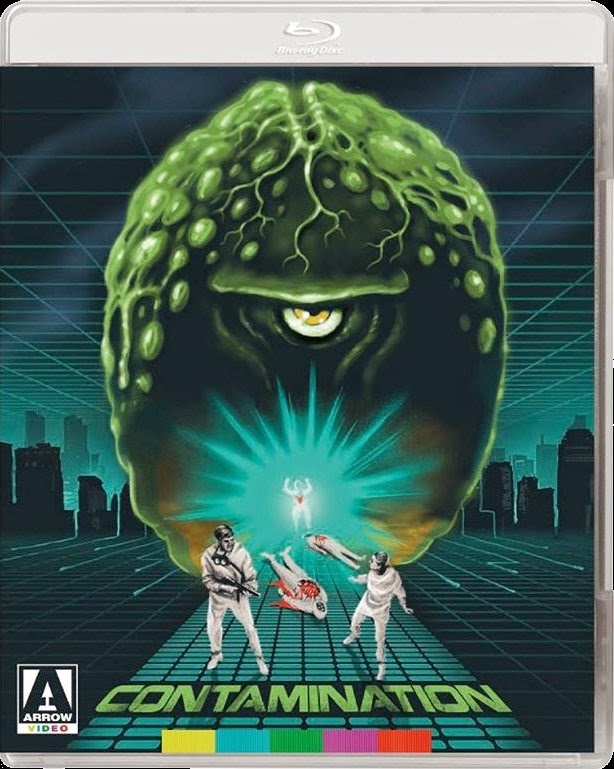 Video nasty fans delight, as giant eggs will burst, stomachs will explode and a giant alien octopus will be confronted in glorious Hi-Def, as Luigi Cozzi’s, Alien knock-off “Contamination”, makes its BD debut this month in the UK (and in the US) in a BD/DVD combo pack from Arrow films.
A runaway cargo ship, brought into the New York docks, is found to be importing more than just coffee, as the authorities discover large alien eggs in the cargo hold. The only problem is, these eggs (actually painted balloons) explode on contact, showering the unfortunate victims with alien goo, causing their torsos to swell up and explode (well, one stomach explosion was what made “Alien” famous, so multiple chest explosions should make this film many times more so, right?).
Anyway, some top secret govt organisation, lead by Stella Homes (played by Canadian actress Louise Marleau) and her trusty sidekick (played by Carlo de Majo – “City of the Living Dead”) investigates, and finds these eggs match the descriptions given by an astronaut, Ian Hubbard (played by "Zombie Flesh-Eaters" Ian McCulloch) from a recent Mars mission, who was subsequently dismissed as a loony.
Realising he was telling the truth all along and these eggs are part of an Alien invasion, Holmes enlists his help, along with a hapless police detective (Marino Mase - "Tenebrae"), and together they head off to a coffee factory in South America. Where they encounter plantations full of eggs, white zombies, even more stomach explosions and a giant alien octopus, called “The Cyclops” who wouldn’t look out of place in an Ed Wood movie.
Cheerfully ripping off “Alien”, bits of “Zombie Flesh-Eaters” and numerous “Quatermass” films, this cheap Italian sci-fi knock off really is a true gem to behold, with over the top gore and an effective soundtrack from Italian group ‘Goblin’ to boot! The film has been available uncut in both the UK and US for some time, but this is the first time its been available on BD anywhere.
The disc I was sent to review was the Blu-ray, but the DVD which is included in the retail pack release, will contain the same extra features, as follows…
“Audio commentary track” - Fangoria and Gorezone editor Chris Alexander, provides a fan based commentary track which accompanies the main feature.
“Luigi Cozzi on Contamination” feature (23mins) - An archive documentary from the early 80s, which is in Italian with English subs in which the director discusses the genesis of “Contamination”, and talks a bit about his other films, like “Starcrash”, featuring some rare behind the scene footage.
“Contamination Q&A” (41mins) – Filmed at the Abertoir horror festival in 2014, director Luigi Cozzi and star Ian McCulloch field questions about this and other films they’ve been involved in.
“Sound of the Cyclops” (11mins) – One for fans of the group Goblin, which is basically an extensive interview with keyboardist Maurizo Gaurini, who talks about the history of the band, the many line up changes over the years and how they came to score this and many other Italian horrors.
“Luigi Cozzi vs Lewis Coates” (42mins) Brand new interview with the director, in Italian with English subs, as he discusses his film making career
“Imitation is the Sincerest for of Flattery” documentary (17mins) – A brief doc looking at how, for many years, the Italians produced a large number of profitable low-budget knocks offs of various Hollywood movies, with American film critic  Mailand McDonagh and ‘Temple of Schlock’ webmaster Chris Poggiali.
Also included is the “Theatrical trailer” and a “Graphic Novel”, based on the original script, which you can scroll through using the chapter skip buttons on your remote (wasn’t too impressed with this last one, but it is interesting to see how the film was originally envisaged).
The case also contains a reversible sleeve, featuring original and newly commissioned artwork by Gary Pullin and inside you get a fully-illustrated collector’s booklet featuring new writing on the film by Chris Alexander.
It is worth pointing out that although this is the UK disc I am reviewing, Arrow are also releasing the film in the US with apparently the same extras on. However, I expect the accompanying DVD will be in the PAL TV format here, whereas in the US the DVD will be NTSC (these different standards don’t apply to BDs)
This is the first time the film has been available on Blu-ray and the quality, as with Arrows other discs, is stunning. Yes there is a bit of grain owing to the original elements, but it’s certainly much clearer than previous DVD releases.
If you love Italian horrors or you collect former Video Nasty titles and are looking at adding this to your collection, this one’s is definitely the ultimate special edition to date and a must for all serious collectors.

Buy the US BD/DVD combo pack from Amazon.com