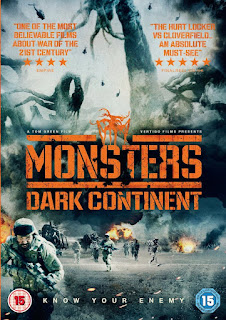 Ten years on from the events of Monsters and the 'Infected Zones' have now spread worldwide. In the Middle East a new insurgency has begun and at the same time there has been a proliferation of Monsters in that region.

With humanity in retreat in many parts of the world, the US is moving to protect its overseas interests. Giant, terrifying sand bugs infest the Arabian Desert, so troops have been sent in to firebomb the creatures, carting their bodies away on giant trucks to be incinerated. In this hostile environment, two soldiers are sent on a high-risk rescue mission.
Directed by Tom Green (Misfits), Executive Produced by Gareth Edwards (Monsters, Godzilla) and starring Johnny Harris (Atonement, War Horse), Joe Dempsie (Skins, Game of Thrones) and Sam Keeley (This Must Be The Place, What Richard Did, The Borgias)