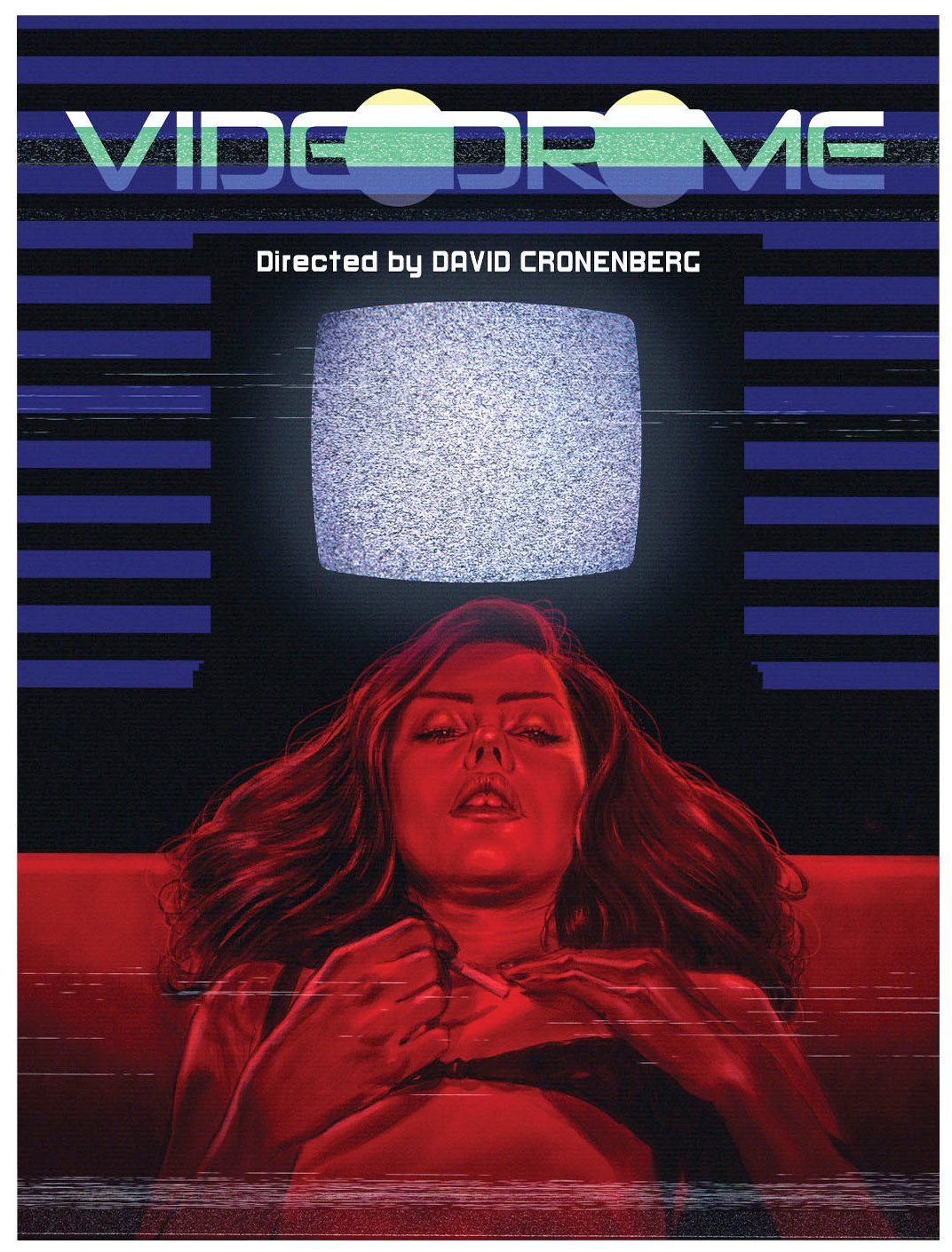 "Videodrome", David Cronenberg’s bizarre film about the subliminal effects of television, is out this month in a special, extras laden, limited edition 4 disc BD/DVD combo pack.

Constantly looking out for new material to air, when their tech expert comes across a scrambled satellite transmission called 'Videodrome', showing supposed Snuff movies, he decides this is just the thing his channel could use. But all his underground contacts warn him against getting involved with the people behind them.

But there's something so strangely compelling about the transmissions that Max can't stop watching them and becomes determined to find out who's behind them. Even though the torture scenes may be genuine and not faked. But then things start to get weird, as Max starts experiencing strange hallucinations, which become more frequent and intense the more he watches the illicit transmissions.

Seems the Snuff videos are a front for something much more intense lurking behind the video signal, and Max may have stumbled onto some sort of conspiracy when he came across them. But with his hallucinations becoming more vivid to the point where not even I could tell whether what I was watching was real or just in his head, including a VCR slot appearing in his chest and a pistol attaching itself to his hand, unravelling who’s behind the Videodrome signals is going to be no easy task.

Also starring singer Debbie Harry, who took the role in an attempt to shake off her squeaky-clean “Blondie” image, “Videodrome” is arguably David Cronenberg’s most surreal feature film. Heavily censored in both the UK, US and in it’s native Canada, the uncut directors version has so far only been available on home video Stateside and in Europe, with the UK having to make do (so far) with the cut down US theatrical version.

But the good news is that this new release from Arrow is of the full uncut directors version, which comes packed with the usual bumper slew of  extras.

This special edition release comes with 4 discs, 2x BDs and 2x DVD copies . I was sent the BD version to review, which contained the following extras…

Audio commentary track – Film critic Tim Lucas, who proudly proclaims himself as being the only journalist allowed on the set during the films production, provides a running commentary track which accompanies the main feature, which is essentially an effective trivia track,

Cinema of the Extreme (21mins) – BBC documentary about Cronenberg’s films, originally broadcast to accompany BBC2s screening of Videodrome back in 1997 as part of their “Forbidden” film season. Which includes interviews with Director Cronenberg, and fellow directors Alex Cox and George Romero.

Forging the New Flesh (27mins) – Documentary about how the special effects were created, narrated by effects supervisor Michael Lennick. Featuring vintage interviews with the cast and crew, behind the scenes footage and new interviews with fellow effects artists Frank Carare, Bill Sturgeon and Rick Baker.

Why Betamax (1min) - Special effects supervisor Michael Lennick answers the eternal question, “Why did everyone in the film use Betamax tapes”?

Interviews – The disc also contains 3 interviews, one with Cinematographer Mark Irwin (26mins) and  Producer Pierre David (10mins) who share their memories about working on the film and one with author Dennis Etchinson (16mins), discussing the challenges involved in his novelisation of the script.

Camera (6mins) – A somewhat bizarre short film by Cronenberg and starring Les Carlson (who plays Brenner in Videodrome) intended as part of a series of preludes shown at the 25th Toronto Film festival back in 2000.

Deleted Scenes (25mins) – A selection of extended, alternate and additional scenes that were cut from the theatrical release, but turned up in the US TV version. Including some less gory takes on some of the death scenes. These were taken from a TV Mastertape, which are in Standard def and presented in full screen.

On the second disc, we have a collection of David Cronenberg’s earlier films

Transfer (6mins) – His first short film, which is an extremely surreal tale about a relationship between a doctor and his patient (you’ll see what I mean when you see it).

From the Drain (12mins) David Cronenbergs second short film. Another bizarre/surreal tale, this time about 2 people sat in a bathtub trying to make small talk (it’s as weird as it sounds).

Stereo (1hr) – Cronenberg’s first short feature. Filmed in Black & White and almost entirely silent, except for narration, another bizarre tale, this time about 8 test subject who have had brain surgery to see if they can make them telepathic

Crimes of the Future (1hr) – One of the weirdest short feature films I’ve seen, similar in style to Stereo (but in colour), a doctor at a dermatology clinic is searching for his former mentor, encountering some very ‘dubious’ characters along the way, in a world where all the adult women have died from a mysterious disease.

Lastly, there’s a special documentary, entitled “Transfer of the Future” (16mins) presented by film critic Kim Newman, in which he discusses Cronenberg’s earlier films and compares them with other directors of era, including George Romero and Brian DePalma, featuring clips from many of their films.

The extras on the DVDs in the set are exactly the same as on the Blu-rays, so you can watch these on any player.

The set also comes complete with an illustrated 100-page hardback book. The discs I was sent did not contain a review copy to look at, but from the press release the book features linear notes by Justin Humphreys, and features by Brad Stevens on the alternate versions, Caelum Vatnsdal on Cronenberg’s early works, extracts from Cronenberg on Cronenberg featuring Cronenberg’s reminiscences of getting started in filmmaking and shooting all the films in this collection, plus more, illustrated with original archive stills. The packaging is fully illustrated by Gilles Vranckx.

A superb selection of extras, however, I will say that the set unfortunately lacks the audio commentary tracks with David Cronenberg, James Woods and Deborah Harry and the full length “Videodrome transmissions” feature that were on the old US DVD from Criterion. But aside from that, this release from Arrow arguably provides the more comprehensive selection of extras overall.

This is a limited edition release, and like their other releases, a must for all Cronenberg fans.
Buy the UK BD/DVD set from Amazon.co.uk
Posted by Dark Angel at 18:55