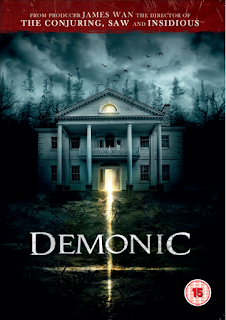 Blair Witch Project meets Sinister in "Demonic", a supernatural shocker from producer James Wan (Insidious, The Conjuring), which comes to UK DVD in Sept following its premiere at this months Frightfest.

When Detective Mark Lewis (Frank Grillo - The Grey, Captain America) is called to a local house, he finds the bodies of three slaughtered college students. The only survivor, John (Dustin Milligan -  Final Destination 3, Slither) claims they held a séance to summon ghosts of people killed in the house years earlier. Now, three of his friends are dead and two are missing – including his pregnant girlfriend.

Teaming up criminal psychologist Dr Elizabeth Klein (Maria Bello - Prisoners, History of Violence), Det. Lewis investigates the videotapes discovered at the scene to try and uncover what really happened that night. What they find is more terrifying than they ever could have imagined…

The film receives it's European Premiere at the Film4 FrightFest on 28th August. It will then be released to UK DVD from Monday 7th Sept. by Icon Home Entertainment.
Buy the UK DVD from Amazon.co.uk