Unleash the animal inside with "WER" this October 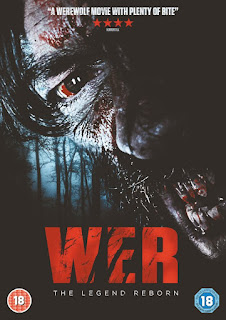 Coming to UK DVD this October, from the makers of The Devil Inside, comes the rebirth of one of horror’s most iconic monsters. Presented as a found footage documentary, it follows a defence lawyer who discovers something beastly about her client.
When something slaughters a family camping in the French countryside, the freakishly large and powerful Talan Gwynek (Brian Scott O’Connor) is arrested for the crime.

While as his public defender Kate (A.J. Cook - Mother’s Day) argues his case, she begins to suspect he’s suffering from a rare medical condition that causes physical abnormalities. But as they begin the tests, Kate discovers his truth is far more monstrous that she ever imagined…

A howling good horror, with a smart reinvention of the werewolf legend, big scares and great performances.
"Wer" is released to UK DVD October 17th from Entertainment One.
Pre-order the UK DVD from Amazon.co.uk
Posted by Dark Angel at 18:26