The Mayhem Festival, which runs from Oct 15-18 at The Broadway cinema Nottingham, are very excited to announce Steve Oram’s "Aaaaaaaah"! and Karyn Kusama’s "The Invitation" as the first two films from this year’s line-up. 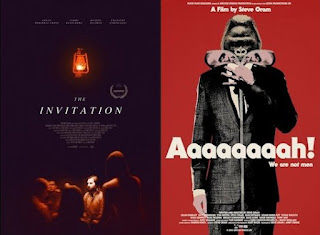 Karyn Kusama’s "The Invitation" will be the closing film of the festival on Sunday 18 October. Hailed as Kusama’s strongest work by Variety, "The Invitation" is a deeply disturbing, slow burn horror thriller from the director of "Jennifer’s Body".
Making his return to Mayhem, will be Steve Oram (Sightseers) with his directorial debut "Aaaaaaaah!" produced by Andrew Starke and executive produced by Ben Wheatley (Rook Films). The film, which contains no traditional dialogue, is an insane and hilarious collision of Romeo and Juliet and The Planet of the Apes in suburbia. Steve Oram will be there to present the film and take part in a post-screening Q&A.
Two great films which really reflect the diversity of the programme, ranging from surreal dark comedy to atmospheric, unsettling tension. Mayhem are also really excited to be welcoming Steve Oram back, after his previous collaboration with Ben Wheatley, Sightseers, proved such a hit with our audience in 2012.
More news soon, so watch this space...
Early Bird Passes are still available at the discounted price of £55, available to buy online from the Broadway Cinema Website