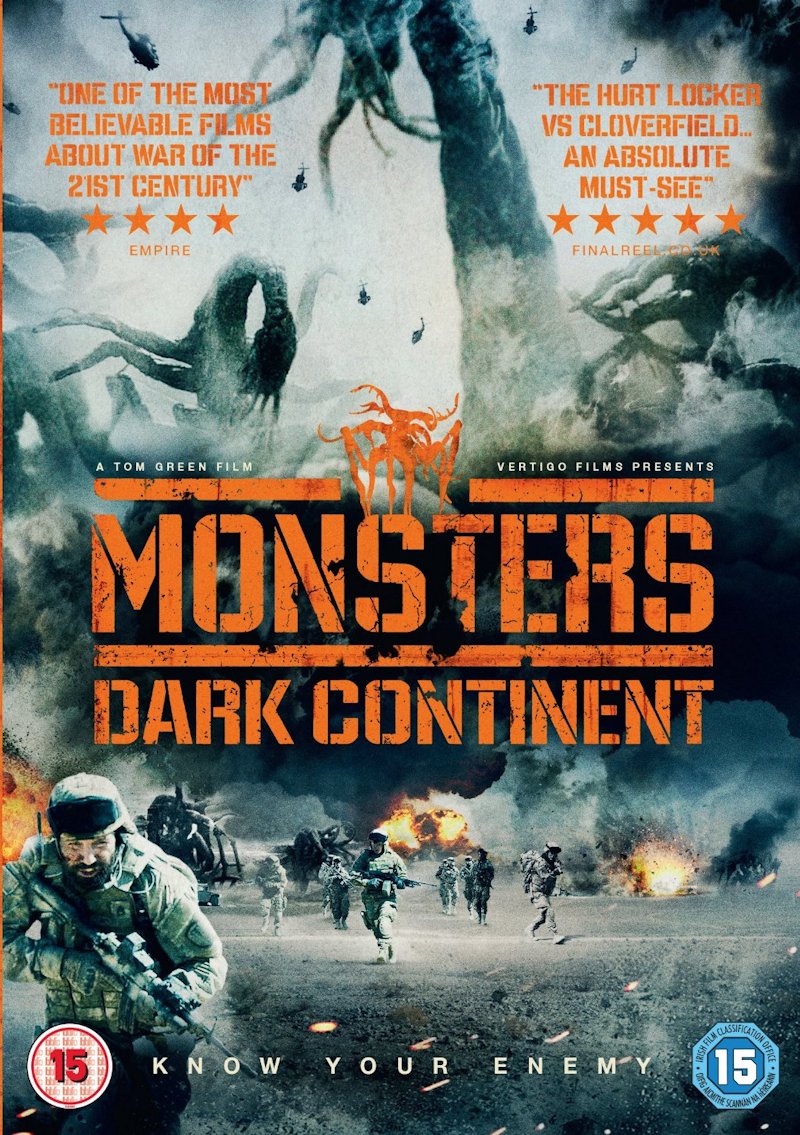 Tom Green’s “Monsters : Dark Continent” is the highly anticipated sequel to Gareth Edwards 2010 sci-fi thriller “Monsters”, which finally gets its UK release this month onto DVD and Blu-Ray.

Now I must pre-face this review by stating that I was NOT a fan of the original “Monsters”, about the South American jungle being over run with giant space aliens. As I thought I was going to get a sci-fi action film, instead I got 90mins of 2 Americans trudging through the jungle, trying to sneak back into the US after they get their passports stolen. The titular monsters being little more than peripheral characters in a background story. So it was with some trepidation that I approached this sequel.

Anyway, taking place some 10 years after the original, the deserts of the Middle East have also been ‘infected’ with the large Alien monsters, and the US military have been sent to help the Arab authorities deal with them. This has caused much consternation amongst the locals, who view the Americans as little more than an invading force. Meaning, despite their good intentions, the US military are having to deal with terrorist insurgents and roadside bombs, as well as these giant aliens.

When a group of soldiers, lead by Sgt Frater (Johnny Harris – TVs “Fortitude”) have to go into the alien inhabited deserts on a search and rescue mission, their group unfortunately falls afoul of a landmine and the surviving soldiers captured by terrorists. But when their captors are forced to flee due to large monster stampede coming their way, two of them seize the chance to escape. But despite their lack of supplies and being surrounded by unfriendly terrorist groups and large aliens rampaging through the deserts, Frater seems hell bent on completing their mission, no matter what…

I actually found this film to be a great improvement over the original, you do get to see much more of the monsters this time and it’s certainly more action orientated than it’s predecessor. BUT, as with the first film, the titular monsters are little more than a backdrop to the actual main story, which in this case is about a group of soldiers travelling through the desert. Which otherwise could have been just another generic war film about the negative effects of US intervention in the troubles in the Middle East.

Indeed, in many ways, the film was very reminiscent (perhaps overly so) of the Ford brothers 2010 film “The Dead”, which was also about a couple of soldiers trying to make it through the desert to safety. But in that film they were up against zombies instead of giant aliens.

The disc I was sent to review was the DVD version, though the BD apparently contains the same supplemental features on, which are as follows…

-Dog Fight VFX Breakdown (2m55) – A look at how the scene showing a pit-bull fighting one of the alien monsters was shot and how they superimposed the CGI effects.

-Filming on Location (12m25) – A behind the scenes look at the various filming locations used in the film.

All of which feature interviews with director Tom Green (that’s the English guy who directed TVs “Misfits” NOT the American comedian) and the cast and crew, including SFX technician Seb Barker and lead actors Johnny Harris and Sam Keeley.

Fans of the original will undoubtedly like this, but if you weren’t keen on that you may not be too receptive.