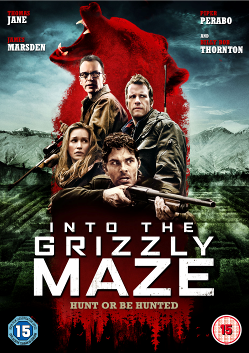 There’s problems afoot for Tom Jane, James Marsden and Billy Bob Thornton in the Alaskan wilderness in David Hackl’s “Into the Grizzly Maze” which comes to UK DVD this month from Signature.

If you go down in the woods today, you’re in for a BIG surprise. Something nasty with huge claws has been picking off local poachers, illegal loggers and pretty much anyone else that enters the forests just outside of the small Alaskan town of Rowley.

Realising they’ve got a wild bear on the loose, a local police officer, Becket (Thomas Jane – “The Punisher”) heads into the woods to find his wife who’s out rambling, and happens to bump into his estranged brother Rowan (James Marsden – “Straw Dogs”, “X-Men”) who’s out looking for a friend of his who’s disappeared.

But trying to get back out of the woods to safety proves no easy task, as the huge beast that’s been rampaging through the forest proceeds to stalk them at every turn. And despite them being heavily armed, it seems this creature is smarter than the average bear…

All puns aside, this is actually a pretty decent action/adventure/horror/thriller, which features quite an impressive cast. Aside from Jane and Marsden, you’ve also got Billy Bob Thornton (“Monster’s Ball”, TVs “Fargo”) who turns up as a bear hunting expert and Scott Glenn (“Bourne Legacy”, “Suckerpunch”) as the Sheriff.

Directed by David Hackl, who also worked on some of the "Saw" sequels, if you like these ‘nature on the rampage’ films, you’ll definitely enjoy this.

The film is released to UK Aug 17 from Signature. No extra features were included on the disc.