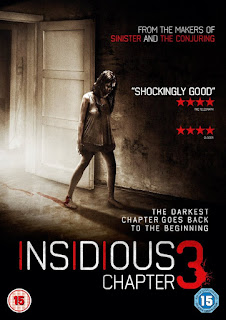 Coming to UK BD and DVD this October. From the makers of "Saw", "Sinister" and "The Conjuring" comes the third chapter of this terrifying series. Exploring the earlier experiences of psychic Elise (Lin Shaye), "Insidious: Chapter 3" is the terrifying prequel that takes Insidious back to the beginning…
When teenager Quinn Brenner (Stefanie Scott) senses that her late mother is trying to contact her, she seeks help from gifted psychic Elise Rainier (Lin Shaye). However, Elise's tragic past makes her reluctant to use her abilities.

After Quinn is attacked by a malevolent entity, her father (Dermot Mulroney) pleads with Elise for help. With support from two parapsychologists, Elise ventures deep into The Further -- where she finds a powerful demon with an insatiable craving for human souls.
The film is released to UK disc October 12th, in time for Halloween. No news yet on what extras will be included on the discs.
Pre-order the UK BD from Amazon.co.uk
Pre-order the UK DVD from Amazon.co.uk