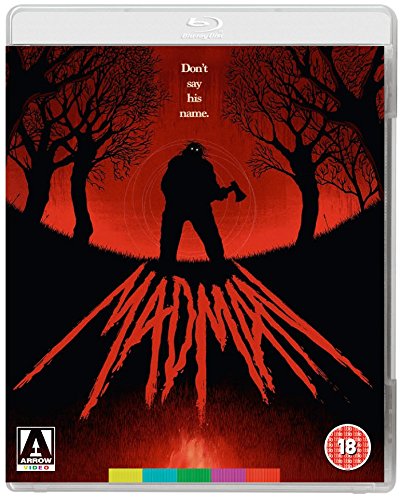 Owing more than a passing nod to “Friday the 13th”, coming out during the slasher boom of the 80s, the film starts with a group of summer camp counsellors hearing a scary campfire tale about a brutal killer named Madman Marz. According to local folklore, he supposedly still haunts the area and if you say his name louder than a whisper, he’ll come for you.

However, one of the teen counsellors decides to tempt fate by shouting his name out loud and throwing a rock through the window of the derelict old farmhouse he supposedly occupied (never a good idea in a horror film).

Needless to say, the next thing we see, there’s a huge axe wielding maniac on the loose in the camp, carving up the teens. Who don’t exactly do themselves any favours by wandering off into the woods alone to look for their missing friends.

Also starring Gaylen Ross (Dawn of the Dead), who’s strangely credited as Alexis Dubin, the film was originally shot under the title “Cropsey”, and was based on the urban legend of the Cropsey Maniac, who supposedly terrorised summer camps in New York’s Hudson Valley. However, they had to change the name and alter the script to try and distance themselves from “The Burning”, which was filming at the same time and was based on the same legend.

“Madman” has previously been available on disc, but this release marks the first time the film has been available on BD, having been transferred from the original negatives, and comes packed with a huge selection of extras.

First of all you get 2x audio commentary tracks that accompany the main feature. The first with Director Joe Giannone, Tony Fish (T.P.), Paul Ehlers (Madman Marz) and producer Gary Sales (originally recorded for the 2001 Anchor bay DVD release). The second is a fan commentary with Joseph Henson, Justin Kerswell and other folk from the Hysteria Continues horror podcast.

The Legend still Lives (91m) – Extensive retrospective documentary about the making of the film, featuring interviews with writer/producer Gary Sales and cast members Harriet Bass (Stacy), Carl Fredericks (Max) and of course Paul Ehlers (Madman Marz himself), amongst others and looks at some of the filming locations (originally recorded for the 2010 Code Red DVD).

Madman : Alive at 35 (21mins) –Tom Candela (Ritchie), Gary Sales and Paul Ehlers meet up and reminisce about the making of the film (Originally recorded for the 2015 Vinegar Syndrome release).

The Early Career of Gary Sales (14m) : Producer Gary Sales discusses how he got started in the film industry and talks about some of his other early productions.

Dead Pit Interviews : Couple of interviews with Gary Sales (3:30s) and Paul Ehlers (5:17s) being interviewed by the host of Deadpit Radio at a horror convention.

In Memorium (5:48s) – Gary Sales pays tribute to Director Joe Giannone, Tony Fish (T.P) and Carl Fredericks (Max) who have since passed away.

Trailers and TV spots – The original theatrical trailer and 5x TV spots are included on the disc.

Stills and Artwork gallery (7:20) – A collection of behind the scenes photos, narrated by Gary Sales, along with a selection of Lobby Cards and review articles.

The case also contains a reversible sleeve, featuring original and newly commissioned artwork by Matt Griffin and inside there’s a collector’s booklet, featuring new writing on the film, illustrated with original archive stills and posters.

This release contains both a BD and DVD. I was sent a Blu-Ray to review, but the enclosed DVD contains the exact same features on.

“Madman” may not be as well known as its contemporaries, but it’s still hugely enjoyable and was apparently the main influence on Adam Green’s “Hatchet” series of films.  If you’re a fan of 80s slashers, this Arrow disc is definitely a worthy addition to anybody’s collection.