Get "Stung" on UK DVD this October 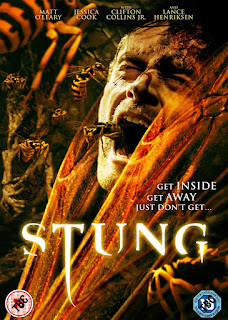 "Stung", a fast-paced horror-comedy that sees a swarm of giant mutant wasps attacking a high society garden party comes to UK DVD this October.
An upper-class garden party on a country estate turns to bloody chaos when a swarm of mutated wasps descends to feast upon its guests.

But with each victim they consume, the wasps grow bigger and it’s only a matter of time before the survivors finds themselves trapped inside a giant nest…
A modern twist on B-movies such as "Them!" and "Piranha", its gory fun and sense of humour will be a huge hit with horror fans. Featuring a cast of up-and-coming talent and genre fan favourites.
The film is released to UK DVD October 26th.
Pre-order the UK DVD at Amazon.co.uk