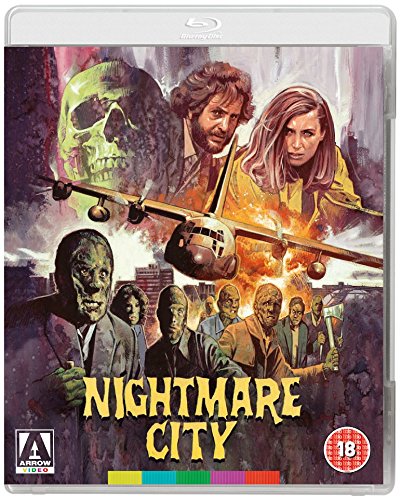 Umberto Lenzi’s outrageous film about radioactive zombies on the rampage gets the Arrow treatment this month, as “Nightmare City” is released in a BD/DVD combo pack to UK video shelves.

Set in an unspecified American city (actually Madrid). News reporter Dean Miller (Hugo Stiglitz) is supposed to be interviewing a scientist at the local airport, when an unidentified military cargo plane touches down.  Surrounded by armed police and soldiers, the doors swing open and hoards of fast moving, radiation scarred zombies burst out from within, wielding bats, chains and clubs.

Miller and his crew capture the ensuing, over the top, action scenes on their cameras, as we see the zombies aren’t stopped by the soldier’s machine gun fire. But their attempts to broadcast the footage on TV are prevented by the military, who don’t want to panic the population.

In the meantime, the zombies continue to rampage throughout the city, attacking the TV station and the local power plant, before turning the hospital into a bloodbath in a series of hilariously, action packed gore scenes. As Miller and his wife try to flee the city.

Exceptionally fast paced, with a body count that’s off the charts. “Nightmare City” is hilariously good fun and is arguably Umberto Lenzi’s most outrageous film.

Zombie make up that looks like they just shoved the actors head into a bucket of mud. Cheap gore, over the top violence, rough acting, bad dubbing and ill fitting army uniforms all add to the charm. Not to mention that the authorities seem to forget the only way to stop these things is a bullet to the head, so the lead actor manages to kill more zombies in the last 10 minutes, than the police and army do in the entire film.

There’s also a charming mish-mash of various Italian, Spanish, American and Mexican actors, who were all added to appeal to the various financial backers. Including US TV actor Mel Ferrer (who also starred in Lenzi’s “Eaten Alive”) Spanish actor Francisco Rabal and Mexican actor Hugo Stiglitz (yes THE Hugo Stiglitz), who’s renown as one of the most wooden actors in European cinema.

Now, there are 2 different transfers of the film included on the disc. The first is taken from the original camera negatives, which were in very poor condition, as the film stock had deteriorated badly over the years. Though the picture is ‘sharp’, the deterioration has produced yellow blotches on the print and jittery colours, which are still evident, despite their best efforts to clean it up.

The second transfer comes from a duplicate negative, which has a slightly softer picture, but better quality overall. Arrow included both as they couldn’t decide which was the best and thought it better for buyers to make their own mind up. Though personally I think the second transfer from the duplicate negative looks superb on my 40” Samsung set.

The problems with the transfers are discussed in one of the special features on the disc, which I’ll come to in a moment. It should be noted that the first transfer uses the original Italian credits, with the title “Incubo Sulla Citta Contaminate”, whereas the second has the more familiar English credits with the “Nightmare City” title.

Both the original Italian dub and more common English language dub are included with both versions of the film (both are mono), BUT unless you go to the set-up menu and select “English” from the language options first, the default language will be Italian, for some strange reason.

Other features on the discs include…

-The Limits of Restoration (4:30) a quick look at the problems Arrow had in transferring the film from the best available source material, including side-by-side comparisons of the 2 prints used to show the difference.

-Umberto Lenzi Interview (28m) – An all new interview, in which the director discusses the making of the film and his casting choices (in Italian with English subs)

Maria Rosaria Omaggio interview (7:50s) – A brief interview with the actress who played Sheila, Major Holmes girlfriend in the film (in English)

-Alternate opening titles – these are basically the English titles, but with the alternate screen title “Attack of the Zombies” at the start.

-Original theatrical trailer - The English trailer, common on many previous DVDs, is reproduced here. But with optional English or Italian audio. Though as with the main feature, the default appears to be Italian for some strange reason.

As with most arrow releases, this is a combo-pack, which includes both the BD and DVD versions of the film. I was given the BD to review, but I believe the DVD contains the exact same extras on, including both transfers of the film (though obviously in SD not HD).

The case also contains a reversible sleeve, featuring the original artwork on one side and new artwork from Graham Humphreys on the other. Also included is a collector’s booklet, featuring new writing on the film by John Martin, author of Seduction of the “Gullible: The Truth Behind the Video Nasty Scandal”, which is illustrated with original archive stills and posters.

“Nightmare City” is a completely bonkers film, which pre-dates the fast-running zombies from “28 Days Later” and the “Dawn of the Dead” remake by over 20 years and just has to be seen to be believed.

This Arrow release certainly gives you the plenty of bang for your bucks. The only things I would have also liked to have seen included though, was some European trailers, plus the intro for the US release “City of the Walking Dead”, but I can live without those. Plus I found it odd that the default language on the discs is Italian, but these are just minor quibbles.

If you haven’t seen this film yet, then pick this one up NOW!!!!
Buy the "Nightmare City" UK BD from Amazon.co.uk
Posted by Dark Angel at 16:41