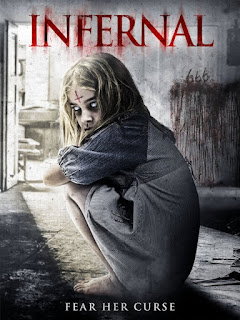 Most young children can be little devils at the best of times. But for one unfortunate couple, they discover their offspring is quite literally just that, in Brian Coyne’s “Infernal” which its UK DVD shelves this month.

Young couple Nathan and Sophia have just moved into a new house, which they've inexplicably decided to wire up with hidden cameras, when Sophia finds out she’s pregnant. Of course, when there’s a sudden earthquake, the soundtrack starts making a noise like distorted feedback and the cross hanging on the wall suddenly turns itself upside down at the precise moment she announces the pregnancy to boyfriend Nathan, you just know there’s going to be trouble.

Anyway, a few years pass by and as their daughter Imogene starts to grow, she seems to have a few behavioural and, possibly, medical problems. Suffering seizures, wandering off in the night and obsessively combing her hair, the doctors think she may have autism. But that doesn’t explain the strange noises and voices the parents have been hearing from her room and weird things they see on the hidden cameras.

The parents relationship also becomes increasingly turbulent and the father’s behaviour more objectionable. But with strange goings on in the house becoming more frequent, could the real reason for her strange behaviour, and the parents relationship breaking down, be due to demonic possession? Well the answer is of course yes, but they don’t seem to be able to figure that one out. Even after a visit from the local priest, which could spell trouble for them all…

Filmed in the style of one of those ‘found footage’ type of films, through the cameras Nathan has wired the house with (though I'm not sure where the footage in the therapists office came from?), the film basically plagiarises “Paranormal Activity” and mixes in elements of  “The Omen”, and “The Exorcist” and to be quite honest, is not a very interesting movie.

There’s these really long periods where nothing much happens, and when something finally does happen, isn’t worth the wait. We discover fairly early on that there’s something demonic going on, but the plot doesn’t really go anywhere with it. I’m not really a fan of the ‘found footage’ sub-genre anyway and the fact that most of the film is made up of drawn out scenes where nothing is happening only added to the tedium and had me fast forwarding through large portions of it.

If you enjoyed the original “Paranormal Activity” you might like this, but if you weren’t a fan of that, or dislike ‘found footage’ type films, you might want to give this one a miss.

The disc did not contain any supplemental features on, aside for a few trailers for other Signature entertainment releases.

“Infernal” is released to UK DVD 24th August from Signature entertainment.
Pre-order the UK DVD from Amazon.co.uk
Posted by Dark Angel at 08:36