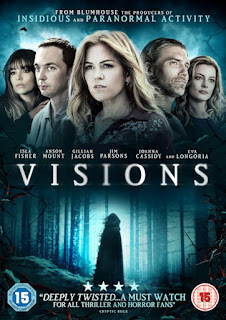 Out on UK DVD and on Digital this month comes Liongate films release of VISIONS from director Kevin Greutert (Saw VI).

The doctor thinks she is just suffering from psychological trauma, partly due to her pregnancy and partly due to a near fatal car crash she was involved in a year previous. But she refuses medication after one of her friends says her meds may harm her unborn child.

Doing some digging, she discovers the vinyard has had a very chequered past and is supposedly haunted and she becomes convinced these spirits of the past mean to do them harm. Attempting to run away from the house, her family think she's crazy and plan an intervention, whereupon we discover that there may have been something in her visions, but not what we originally thought they were….

For the most part the film is your straight, by the numbers, supernatural thriller. In which one person can see all manner of strange things that no one else can, which may or may not be imagined, and of course, no one else believes them.

But then towards the end, the film takes a sudden, unexpected and, not to mention, very nasty twist. Which seems to borrow some ideas from the 2007 French film "Inside".

To summarise, though initially unimpressed at the start, I felt it redeemed itself with the twist in the films final act, when things kicked up a gear and the tension really starts to ramp up and the film also benefits from a strong supporting cast, which includes Star Trek's John DeLancie (old "Q" himself) and cult film actress Joanna Cassidy (Blade Runner).

The film is released to UK DVD and Digital outlets June 20th.