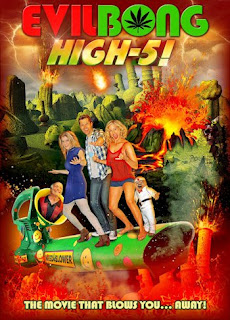 Charles Band’s Full Moon Pictures will be releasing the latest instalment to their Evil Bong series on US DVD and VOD this month, with “EVIL BONG : HIGH-5”.

Now, I must confess that I have yet to see any of the previous films. So I am assuming this follows on from Part 4, as we see the films main protagonists, Larnel (John Patrick Jordan), Rabbit (Sonny Carl Davis), Velocity (Amy Paffrath),  Sarah (Robin Sydney) and the Gingerdread man trapped inside Bong World.

Anyway, EeBee, the titular “evil bong” of the film, is bent on taking over the world, so sends Larnel, Rabbit and the Gingerdread man back to run a marijuana shop to sell her magical weed, in order to raise funds for her conquest (or something like that), whilst holding the 2 girls hostage and the film follows their misfortunes in trying to run a business, whilst shamelessly promoting various Full Moon Pictures merchandise.

Many characters from the previous films (and other Charles Band pictures) pop up, including Hambo (Chance Reardon), who was also in “Strippers vs Zombies” and Larnel’s Grandpa (Jacob Witkin) also makes an appearance, who has all the best lines in the film (“You look like something that a racoon shat out after Halloween”).

Clocking in at around 1 hour 10mins, this isn’t an overly long film and was obviously very low budget, though it looks like it had more money than it probably did. The plot is very silly, but what it lacks in depth it makes up for in tom-foolery and topless women (topless Twister anybody?).

Anyway the film is released in the US on DVD and VOD June 26, and if this wasn’t enough, it ends with a promise of a part 6 coming soon.

Buy the US DVD from Amazon.co.uk