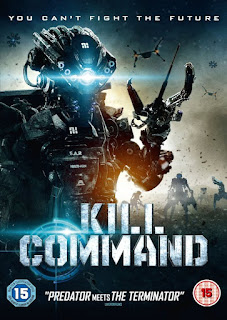 A dazzling, action packed mix of Predator, Robocop and District 9, but with a distinctly British flavour, KILL COMMAND is a sci-fi thriller not to be missed!

An elite squad of marines are sent on a training exercise to a remote island cut off from all communications. Accompanying them is technical specialist Mills, a mysterious coder whose brain is interfaced with a computer.

The unit soon discover the exercise is far from routine - they become live targets of terrifyingly advanced military robots, and Mills is somehow involved in the conspiracy. Realising they need Mills’ abilities to survive the brutal battle to the death situation, the marines must not only fight for their lives but work out who Mills really is and whose side she’s really on.

Kill Command is a low budget sci-fi that defies its budget – visual effects supremo turned director Steven Gomez has fashioned a slick, exciting and expertly designed action film that is the match of any multi-million pound Hollywood blockbuster

Blending a plot of military conspiracy with all out nuts and bolts bot against marine action, Kill Command is brimming with energy and invention, and goes to show you don’t need a huge amount of money, just a brilliant imagination, to make for a stunning sci-fi experience.