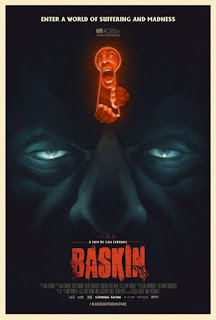 Turkish Indie horror BASKIN is to get a limited theatrical release in UK cinemas this July. Originally slated for a UK VOD release in June, the film will now be shown in selected UK cinemas, alongside its new VOD release date, on Friday the 15th July.

A five-man unit of cops on night patrol get more than they bargain for when they arrive at a creepy backwater town in the middle of nowhere after a call comes over the radio for backup.

Entering a derelict building, the seasoned tough guys and their rookie junior, do the one thing you should never do in this kind of movie: they split up. They soon realize they’ve stumbled into a monstrous charnel house and descend into an ever-more nightmarish netherworld where grotesque, mind-wrenching horrors await them at every turn.

This is one Baskin  (that’s “police raid” to you non-Turkish speakers) that isn’t going to end well. But wait! Things aren’t what they seem in this truly disturbing, outrageously gory, and increasingly surreal film whose unpredictable narrative pulls the carpet from under your feet and keeps you guessing right up to the final moment.

One of the most shocking and jaw-dropping horrors for years, featuring a new icon of fear – The Father – and some of the craziest, most visceral horror ever seen, "Baskin" is an absolute must-see for all horror fans.

Watch Baskin in selected UK cinemas, and on VOD, from Friday 15th July from Vertigo films.