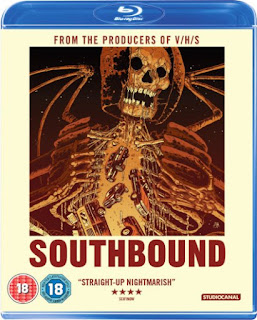 One of the biggest highlights of FrightFest Glasgow 2016, Southbound is a twisted and shocking anthology horror from the minds behind the V/H/S trilogy, which comes to UK disc and Digital this August.

On a desolate stretch of desert highway, weary travelers -  two men on the run from their past, a band on their way to the next gig, a man struggling to get home, a brother in search of his long-lost sister and a family on vacation - are forced to confront their worst fears and darkest secrets in a series of five interlocking tales of terror.

With interwoven chapters that tell tales of misadventure along the same stretch of lonely highway, Southbound keeps you on the edge of your seat with a chilling blend of overarching dread and big frights.

Meeting rapturous acclaim at Glasgow FrightFest 2016, the film has evoked comparisons with some of the truly great anthology titles of the past such as The Twilight Zone thanks to its creepy premise, otherworldly sense of dread and its neat, twisted conceit.