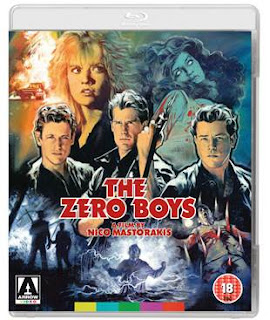 Out on special edition BD & DVD in the UK this month from Arrow films, comes Niko Masterakis (Island of Death) obscure slasher/action film “The Zero Boys”, which is released in an extras packed BD & DVD combo pack.

A group of paintball enthusiasts (the titular Zero Boys) head off to celebrate their latest victory, by spending the weekend at a remote cabin in the woods, deep in the countryside (well, where else?).

Unfortunately, it seems someone with murderous intentions has been using the property to pick off wayward backpackers and when bad weather cuts the power and phone lines, the group find themselves stalked by a murderous family of back-woodsmen.

Fortunately, the group take their paintball combat training very seriously, and armed with a case of automatic weapons, they set about putting their combat skills into practice, resulting in a rather silly series of confrontations between the group and the murderous family.

Originally released back in 1986, the film is part action, part horror and part dark-comedy and is exceptionally cheesy and over the top. But despite it’s relatively obscure nature, Arrow have done their usual sterling work in compiling extras for this release, which includes....

Nico Masterakis on Nico Masterakis (27mins) – Light hearted interview in which the director plays both himself and the interviewer asking himself questions about Zero Boys and other films.

Music Videos – A somewhat odd feature, in which a couple of Hans Zimmer’s instrumental scores from the soundtrack are set to images from the film.

Lastly there’s the original theatrical trailer, a gallery of production and behind the scenes stills from the film and if you put the discs into your BD or DVD rom drive you can access the original screenplay.

The case also contains a booklet featuring linear notes on the film by critic James Oliver, which is illustrated throughout with stills and promo material and the sleeve features reversible artwork with the original poster on one side and newly commissioned artwork from Graham Humphries on the other.

Intended to cash in on the slasher boom of the 80s, “The Zero Boys” may not quite be “Deliverance” or “Wrong Turn”, but it’s a rather fun film never-the-less and Arrow have done their usual sterling work bringing this to disc and boasting a brand new 4K scan of the film, is undoubtedly the best its ever looked.

The film is available to purchase now.