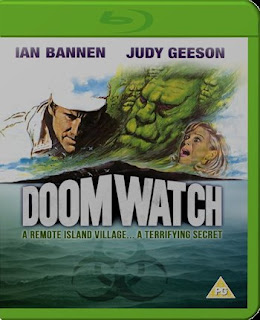 Doomwatch is one of the great, lost TV programmes, a classic slice of science fiction (with the emphasis as much on science as the fiction), a stunningly prescient homegrown programme that followed hot on the heels of Doctor Who. Famed for its look at issues facing us long before anyone else, not least technological developments, the threats they post and fears over what was happening to the environment, it also set the template for sci-fi programmes for years to come - with the series spinning off into the feature film world.

And now, for the first time on Blu-Ray and in a newly restored DVD version, the feature length outing for the sci-fi thriller Doomwatch arrives on 20 June, courtesy of Screenbound.

Doomwatch, directed by Peter Sasdy (Taste the Blood of Dracula, Hands of the Ripper) takes the series one step further and, thanks to this pristine restoration looks better than ever.

Following an oil tanker spill near the island of Balfe, Doctor Del Shaw (Ian Bannen - Waking Ned, To Walk with Lions) of Doomwatch, the British government's environmental monitoring organisation, is sent o investgate its effects on the remote fishing village. But he soon discovers strange happenings abound in the community.

The islands men folk are displaying signs of agression, insolence and unusual facial deformities that appear to be transforming them into near Neanderthals. The villagers are suspicious of the stranger in their midst, but with the help of a local teacher (Judy Geeson - The Eagle Has Landed), the doctor soon discovers the cause, but can he find a cure.