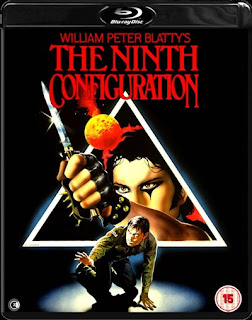 The film stars Stacey Keach as military psychologist Colonel Hudson Kane, who’s sent to a remote castle, which is being used as a mental hospital for US forces personnel.

Anyway, Kane has been given the unenviable task of finding out whether the men there are genuinely insane, or if they are faking it to get out of active duty and, as we soon see, he has some pretty unorthodox methods of trying to reach them.

But there’s actually another reason Kane has been sent to this particular institution, and the patients may not be the only ones faking things to get out of serving on the front line.

Part drama, and part dark comedy, Ninth Configuration is a very bizarre film, based on the equally bizarre novel Twinkle Twinkle Killer Kane by William Peter Blatty (author of The Exorcist), who also wrote the screenplay and directed himself.

Special features on the disc include.

Interview with actor Stephen Powers, who played the role of Sgt Christian in the film (7:30)

The Party Behind the Curtain (13mins), archive interviews with Tom Atkins, Jason Miller and Richard Lynch, speaking about their time on set, which were culled from other interviews.

Making of feature (6mins) – archive feature, presented by critic Mark Kermode and featuring interviews with William Peter Blatty as they discuss the film.

Outtakes and deleted scenes (20mins), a bumper selection of scenes culled for time or pacing reasons, including an alternate ending which was the one used on previous VHS releases, which seem to have been taken from various sources of variable quality. Also these are shown in full screen with black bars at the top and bottom, so you actually get black bars round all 4 sides on your widescreen set.

The audio commentary, making of feature and deleted scenes had also been included on the previous UK and US special edition DVDs, whilst the interviews have been ported over from the US BD from Severin. However, it is worth noting that the deleted scenes were in anamorphic widescreen on the previous DVD, so why they’ve decided to show them in full screen and letterboxed on here is a bit odd.

But in any case, this is  still a nice collection of features and if you’re a fan of Blatty’s other works, or you love cult movies then you really need to check this one out and this disc from second sight comes highly recommended.

The film is released to UK BD April 25th, there is also a DVD version of this available which contains the same extras on.