Valentine's Day has come and gone, but horror fans celebrate year-round with the 1981 slasher classic, My Bloody Valentine. Fright-Rags is heading to Valentine Bluffs to commemorate the film's 35th anniversary with a special release. 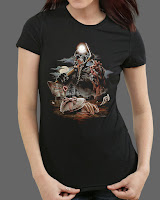 Justin Osbourn's killer miner design stole fans' heart when it sold out earlier this year. It has been reprinted by popular demand, available on men's shirts, girls' shirts and zip-up hoodies.

The artwork is also featured on limited edition 11x17 posters for the first time, each one autographed by Paul Kelman, who starred in the film as T.J.

The Bloody Miner shirts and posters are on sale now at Fright-Rags.com. Quantities are limited and moved quickly previously, so don't be left brokenhearted this time around.

Fright-Rags' other recent releases include shirts from The Monster Squad, Night of the Creeps, The Fog, The Howling, Invasion of the Body Snatchers, The Human Centipede and more.