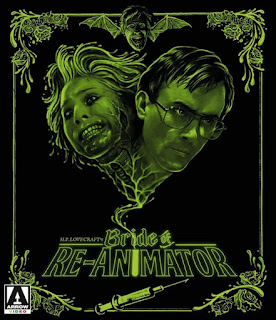 Brian Yuzna’s cheekily titled 1990 sequel “Bride of Re-Animator” comes to UK BD and DVD in an extras packed, 3-disc limited edition combo pack box-set from Arrow films this month, to both UK and US video shelves.

Some 8 months after the events of “Re-Animator”, and Dr Herbert West (Jeffrey Combs, who seemingly survived the zombie massacre at the end of the last film) is up to his old tricks again with his friend Dr Daniel Cain (Bruce Abbot).

Having refined their re-animation agent, they are convinced they can create a new human life out of body parts, and to that end have been busy plundering the Morgue at Miskatonic Medical school for suitable parts to create their "perfect woman".

Unfortunately, things go awry when a bungling detective, who suspects West had something to do with the earlier massacre at the medical school, discovers what they’re up to and ends up going to same way as the late Dr Hill from the previous film. To make matters worse, a doctor at the hospital inadvertently re-animates the late Dr Hill’s head (David Gale making a return appearance), who proceeds to enlist the help of some surviving zombies in the hospitals secure wing and they proceed to go after West and Cain.

More darkly humoured antics follow, as Dr West amuses himself by building bizarre creations out of spare body parts, Dr Hill has a pair of bat wings attached to his severed head and goes flying round Herbert's house, and finally Dr West's creation "Gloria" comes to life, only to reject his advances and get the hots for Dr Cain instead.

Originally released in the UK as “Re-Animator 2”, this cheeky re-working of “Bride of Frankenstein” boasts some lovely gore scenes, most of which were cut from its US theatrical release, and some wicked dark humour.

Up until now the best version to own was a long out of print special edition US DVD from Pioneer (which I have), as subsequent releases have been bare bones discs, many of which contained the cut US theatrical version of the film.

This special 3 disc release from Arrow proves to be the definitive version to go for. Containing both the directors "unrated" cut of the film and the less gory US theatrical (R-rated) cut, along with a massive collection of extras, which includes… 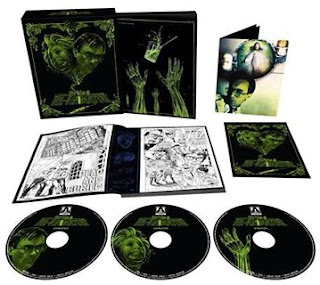 Getting Ahead in Horror" (23:50) archival making-of featurette, which is essentially a collection of behind the scenes footage showing how they did the special effects for the film

Also included are 2 deleted scenes, "Meg is Re-Animated" (8:04) which includes behind-the-scenes footage and "Carnival Sequence" (2:00), which is shown as a series of stills, with the director narrating.

And lastly there’s the US theatrical trailer.

Disc 2 - DVD version of the film, which contains the exact same features as the Blu-Ray.

The less gory (R-Rated) US theatrical version of the film, which utilises some alternate footage to replace some of the gorier moments.

Behind the Scenes Reel (14:30) – more behind the scenes footage from the guys at KNB effects.

Also included is a booklet featuring the complete comic book series “Dawn of the Re-Animator”, a prequel to the original “Re-Animator” film.

This release by Arrow has been scanned from the best available elements, and looks absolutely fantastic. I’m assuming that the original negatives weren’t available, as they admit the scan was taken from a film print, but even so both the Unrated and R rated versions look gorgeous on my Samsung TV.

As well as the wealth of new extras, I was also delighted to see they’d included many of the features from the old Pioneer DVD, which is a devil to get hold of, being out of print for about 15 years now.

If I was going to be picky, I would have liked to have also liked to have seen the inclusion of the old UK trailer and intro titles, which were done under the title “Re-Animator 2”, but I guess you can’t have everything.

Released April 11th, this box set is strictly limited to 5000 units in the UK and 5000 units in the US and as with Arrow’s other limited edition releases, is bound to sell out fast. So if you love Herbert West, get those pre-orders in NOW to avoid disappointment.