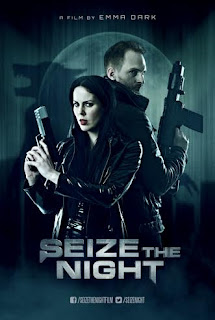 Emma Dark will be releasing her new vampire film SEIZE THE NIGHT, online for free on May 3rd.

Synopisis - After escaping from a secret government bio-research compound renegade vampire assassin Eva (Emma Dark) is hell bent on revenge. Receiving a tip off from the mysterious Dante (Anthony Ilott, Wrong Turn 6: Last Resort) she meets with arms dealer Joe (Paul Ewen - Cockneys vs Zombies) who informs her that an enemy is hot on her tail.

Eva hunts the hunter and encounters a team of werewolves, led by pack alpha Tobias (Carey Thring - From Hell). During their confrontation Eva learns a terrible secret and is forced into a situation of such gravity she may have to join forces with the devil she knows in order to fight the greatest of all evils.

The Film will be released via a link on a special Facebook events  page here...  ONLINE RELEASE: Seize the Night

SEIZE THE NIGHT has been playing the festival circuit to much acclaim and won it's creator Emma Dark an MMBF Rising Star award at Ireland's The Yellow Fever Independent Film Festival, garnered favourable reviews from a multitude of respected genre websites including Dread Central, Starburst and UK Horror Scene, and featured in comprehensive national print articles in the UK's leading horror magazine Scream, and indie filmmaking favourite Digital Filmmaker Magazine.