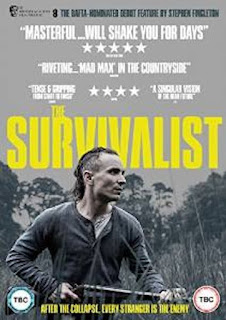 Set in a world, in which civilisation has completely broken down, presumably after some unspecified global catastrophe. Martin McCann (Clash of the Titans) plays the films titular Survivalist, who’s hidden himself away, deep in the woods, hoping to avoid the gangs of marauders who are out killing and stealing from everyone that crosses their paths.

Naturally wary of others, when a woman (Olwen Fouere) and her young daughter (Mia Goth – Everest) chances upon his shelter asking for help, he is initially reluctant to take them in. But with loneliness getting the better of him, and the offer of someone to share his bed seemingly too good to pass up, he finds himself striking up an uneasy friendship with the two. But in a dog-eat-dog world, will his act of quasi-kindness be his undoing, particularly when a gang of raiders turn up?

Somewhat reminiscent of “The Road”, “The Survivalist” is an exceptionally dark, gritty, disturbing dystopian/post apocalyptic thriller, which shows you just how ruthless bad people can be and indeed just how bad otherwise good people can be when placed in an extreme survival situation.

Overall I was very impressed with this and was pleasantly surprised to see genre regular Doug Russel (Let Us Prey) making an appearance. However, the subject matter certainly makes for grim viewing and is not the sort of film you’d want to watch if you’re in need of cheering up.

The film is out now on UK DVD and BD. The screener I watched was devoid of extras, no idea if there are any supplemental features on the retail release.


Buy the UK BD at Amazon.co.uk