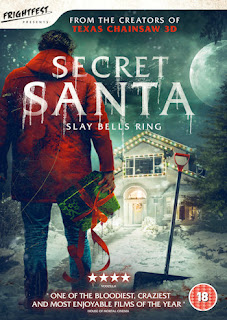 Christmas dinner turns bloody in this ferociously brilliant, gore-soaked horror comedy from the creators of Jason Goes To Hell and Texas Chainsaw 3D.

A Christmas Eve gathering takes an unexpected turn after a family guest spikes the punch with a military grade version of truth serum sodium pentothal. The already dysfunctional group comes unstuck in a blizzard of drug-induced, painfully candid outbursts, and upset soon turns to carnage after the head of the family runs amok with a fork, triggering festering loathings and savage reprisals.

The second film to be released under the FrightFest Presents label, the new venture from leading independent distributor Signature Entertainment and leading genre festival FrightFest, SECRET SANTA debuted at this year’s prestigious FrightFest Glasgow, and is the perfect stocking-stuffer for horror fans suffering Halloween withdrawals and in need of a fix of gore and giggles.