Day 2 of this years Mayhem Film Festival started a little earlier than previous years, as the organisers decided to squeeze in an additional film to the days programme. Things kicked off just after 2pm with a special screening of the 1952 Finnish fantasy/horror pic "The White Reindeer".  The plot of which revolves around a young woman, who is bored being at home by herself in her remote village, whilst her husband is out farming reindeer.

Obtaining a "love potion" she is told will make her irresistable to other reindeer farmers, she finds the potion does what it says on the bottle. But not in the way she envisaged.

Soonafter numerous people in the village start dieing in mysterious ways, after spotting a mysterious rare White Reindeer in the area (their fault for following it into a place called "The Evil Valley", the clue is in the title guys).

Considered something of a lost classic by fans of early European horror, its very much a slow burner and is really a film for lovers of vintage horror cinema, or arty sort of films. Its in B&W (obviously) and in it's original Finnish language with English subs.

Not my cup of tea, but if you're curious, Eureka Entertainment will be releasing it on disc in the UK later this year. 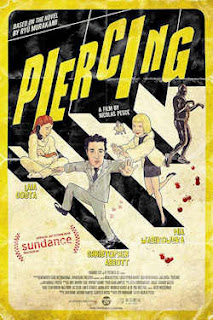 Next up was the extremely bizarre "Piercing" by Nicholas Pesce (The Eyes of My Mother). In which a would-be serial killer, who has spent weeks planning the perfect crime, finds that the best-laid plans of mice and men often go awry. When the call girl he selects as his first victim proves to be extremely unpredictable and a comedy of errors ensues.

The late afternoon slot on Day 2 of the Mayhem Festival is usually reserved for bizarre films and this was certainly no exception, as the would be killer finds his potential victim may be just a psychotic as he is and her bizarre antics had the audience wondering just what the hell was going on.

Really didn't know what to make of this one, it was obviously meant as a dark comedy, but the plot never really went anywhere. As for wether its any good, all I can suggest is checking it out for yourself and seeing what you make of it.

Interesting use of music from various Dario Argento films though. 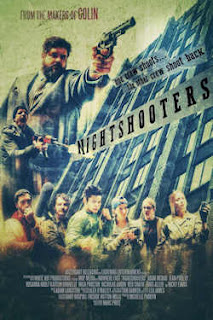 Marc Price's "Nightshooters" proved to be one of my favourite films of the day, in which the cast and crew of a low budget zombie film, working late in a derilict office block, witness a gangland hit in the building opposite.

Realising they've been spotted, the gangsters storm the building looking to take out any witnesses. But fortunately the film crew, armed with props from the film, manage to fight back and a series of hilarious bloody battles ensues.

Really loved this one, there were some great action scenes. Particularly where the special effects girl rigs up a bunch of charges to take out the gangsters.

Though undoubtedly the best scenes are where the film's stuntman (Jean-Paul Ly, who is a real life stuntman) takes the gangsters on using martial arts, in a series of fast paced fights, and effectively stealing the show in the process.

The film was certainly well received by the audience, who clapped and cheered throughout the gorier moments and would definitely reccomend seeing this one when its released. 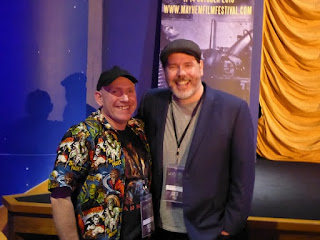 Director Marc Price (who also directed the cult zombie short film "Colin") was also in attendance to introduce the film and do a Q&A session with the audience afterwards. Footage of which will be on my YouTube channel shortly 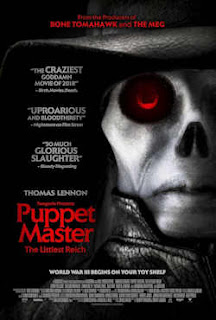 For this new re-imaging of the popular series, a convention surrounding  notorious serial killer, Andre Toulon (yes he's a killer in this version), known as the "Puppet Master" as he made a living selling grotesque puppets to collectors, is being held to mark the 30th anniversary of the Police raid that killed him.

But problems arise when several of guests discover their original Toulon puppets, they had brought to auction off at the convention, have been "stolen". But then when the police show up, convention goers start dieing in exceptionally grotesque ways from unseen assailants.

Extremely politically incorrect, as the puppets start targetting Jewish, Blacks and anyone that sounds like they might be a Gypsy, this one really ramped up the bad taste humour to 11 (the scene with the Baby Hitler puppet had the audience in hysterics).

If you liked the other Puppet Master films (or even if you didn't) you should love this and it was good to see horror veterans Udo Kier (Iron Sky) in a brief role as the murderous Toulon, and Barbara Crampton (who was also in the original Puppet Master) as a security guard.
Interestingly, although this is a reboot they are apparently still going to be making sequals to the original films as well as the new franchise, which will be interesting. 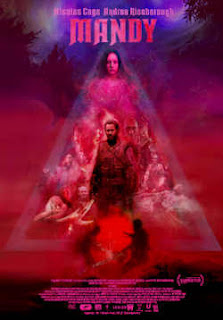 Last film of the night is a film that I would ordinarily not bothered with, basically because it stars Nicholas Cage, who is a person I cannot abide and avoid his films wherever possible. However, as the Mayhem Festival had provided me with a free Press Pass. felt obliged to endure it.

Oh boy, what a mistake that was. No amount of free festival passes could ever justify the 2 hours of pointless trippy visuals, hammy acting and mind numbing boredome I had to sit through. Despite downing a few beers before going in, I was nowhere near drunk enough to put up with the levels of weirdness, and sheer pretenciousness of this art film.

Set in 1983, A couple living in a remote woodland cabin (Nic Cage and Andrea Riseborough, who plays the eponymous "Mandy") are attacked by a bizarre religious cult.

When Cage's wife is taken from him, he sets out to hunt them down, armed with a crossbow and something that resembles a Klingon Batleth (clearly the Police don't exist in this film then?). Battling demonic bikers and other weird folk that inhabit this strange world where everything is bathed in a red fog.

If David Lynch got high on acid and tried to direct a Vangelis music video, it would probably look something like this. The plot, which at its core is your basic revenge thriller, is secondary to the weird arty, farty visuals that dragged out the run time to just over 2 hours. Not even the chainsaw duel at the end could alleviate how utterly shambolic this film was to me (Texas Chainsaw Massacre did it better).

Whilst its true the audience were in hysterics in parts, they were laughing at it for all the wrong reasons. I know they say "there's always some pleasure to be derived from a bad movie". But the only pleasure I could possibly derive from this, would be to force someone I didn't like to watch it.

I hadn't watched a Nic Cage film since around 2002 (the "Gone in 60s" remake, just to see how it compared to the original). After this, I doubt I will ever be watching another one again.

The film is apparently out now in the UK, being given a limited cinema run, then being released to disc at the end of October, in case their are any massochists who wish to enflict this on themselves (or buy a copy for someone they don't like).

And that concluded Day 2.

The Mayhem festival runs each October, at the Broadway Cinema - Nottingham.