It's mid October and I'm at the Broadway Arts Cinema in Nottingham, surrounded by fellow horror fans, which can only mean one thing.

It's time for the annual Mayhem Film Festival for another 4 days of Horror, Sci-Fi, Exploitation and just downright bizarre movies.

ANNA AND THE APOCALYPSE 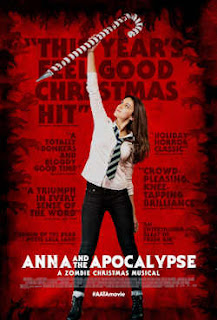 This years festival kicked off with the extremely bizarre ANNA AND THE APOCALYPSE. A romantic teenage comedy musical, set at Christmas time, but against the backdrop of a zombie apocalypse (yes you read that right).

Probably best described as a cross between High School Musical and Shaun of the Dead, this unusal mash up of opposing genres stars Ella Hunt (Robot Overlords) as the films titular heroine. Whose dreams of travelling the world and going to university after finishing school are subsequently dashed, when a full scale zombie outbreak grips her home town (although its several songs before she realises what's going on around her).

She and her friends are subsequently forced to fight their way across town to reach their parents, who are stuck in the school, whilst emoting their plight through the medium of song,  accompanied by lots of gory zombie mayhem, which had the audience in hysterics. Although the show was arguably stolen by Paul Kaye (AKA Dennis Pennis) who puts in an absolutely outrageous performance as the Deputy Head Master, Mr Savage.

If you remember that episode of "Buffy the Vampire Slayer" which was done as a musical, it's kind of like that, but with zombies instead of vampires.

Director John McPhail was in attendance to introduce the film and do an audience Q&A afterwards. Footage of which will appear on my YouTube channel shortly. 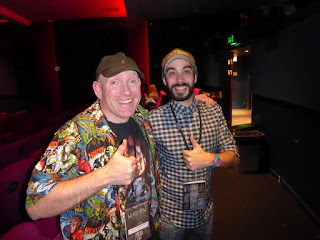 The film was very well received by the audience and is a damnsite more enteraining than watching The Sound of Music at Christmas. Lets hope it gets released soon! 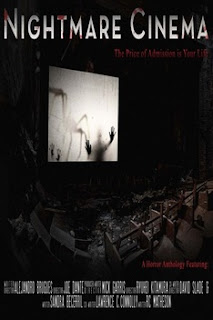 The second and final film of the opening night was the anthology film NIGHTMARE CINEMA, in which several unsuspecting folk go, one-by-one, inside a dilapidated cinema. Only to find they are the main protagonists in the films being screened by the sinister projectionist who resides there (played with unholy relish by Mickey Rourke).

There are 5 stories, with each one revolving around one of the characters in the cinema, and each by a different director.

The first "The Thing in the Woods" (By Alejandro Brugués - Juan of the Dead) was a throwback to 80s slasher films, with 50s sci-fi B-movie twist, in which several teens staying at a remote cabin in the woods find themselves being stalked by a maniac in a welders mask.

"Mirare" (Joe Dante - Gremlins) is about a bride to be, who discovers first hand the perils of going overboard with plastic surgery, after deciding to have some work done on her face before her big day, with Richard Chamberlain as a sinister surgeon (I'll never watch Dr Kildare in the same light again, that's for sure)

"Mashit" (Ryûhei Kitamura - Midnight Meat Train) puts a new spin on the old demonic possession films, when a priest and nun at a catholic school are forced to battle an entire dormitory of possesed children in a battle scene that would make Peter Jackson proud.

"This Way to Egress" (David Slade - 30 Days of Night) was definitely the wierdest. Filmed in Black and White, a housewife goes to see a psychologist fearing she is losing her grip on reality as people she sees seem to change and take on demonic appearances. But which reality is she losing her grip on?

The final segment "Dead" (Mick Garris - Sleepwalkers) concenrns a young boy, who is the lone survivor of a botched car jacking, that finds he can now see the ghosts of dead people after being resusitated in the hospital. But that might not be his biggest problem when the carjacker decides he doesn't want any witnesses left behind. 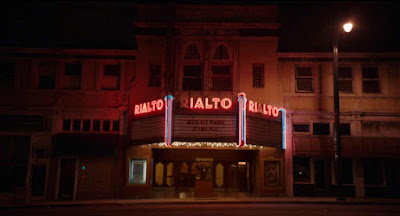 Overall I enjoyed the film, which seemed to owe more than a passing nod to "Tales from the Crypt", but with Mickey Rourks as the Cryptkeeper (or projectionist in this case) and I would certainly reccomend giving it a watch.

However, where the film falls flat is it seemed to lack a point to it all? It was never explained how the films related to the characters watching them. Were they being punished for something they'd done? If so what?

But, the audience seemed to like it, so I would reccomend it to you.

The Mayhem festival runs each October, at the Broadway Cinema - Nottingham.