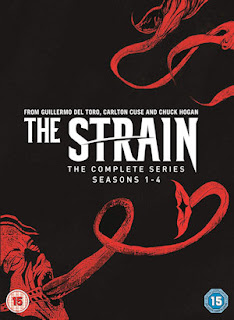 Get infected by a stylish and shocking horror drama this Halloween from Academy Award® winner Guillermo del Toro. With all 46 episodes telling the complete saga in one binge-worthy collection, when you’re not gripping the edge of your seat, you’ll be jumping off it!

Based on the novels by Guillermo del Toro and Chuck Hogan, The Strain draws on fears modern and arcane alike with the horror auteur’s frightening new take on the bloody vampire mythos.

House of Cards alumni Corey Stoll brings a complex gravitas to his standout lead role as a researcher struggling to prevent the collapse of both New York under a vampire plague, and his marriage. Award-nominated performances from David Bradley, Richard Sammel and more help round out a strong supporting cast as well.

With a stylistic flair reminiscent of The Shape of Water and the fanboy spirit that birthed Pacific Rim, Guillermo del Toro’s fingerprints are all over The Strain, creating a gruesome mystery that will delight fellow genre fans, but be a nightmare for anyone with a weak stomach! 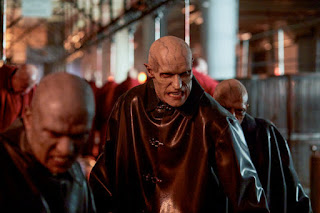 Series 1:
In The Beginning
A Novel Approach
Setrakian’s Lair