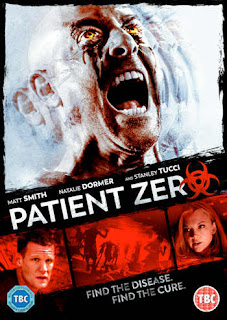 Matt Smith (TVs Dr Who) tries to save humanity from a world full of blood thirsty killers, following a global pandemic, in PATIENT ZERO which is out now on UK DVD from Sony.

A Rabies like pandemic has swept the globe, turning people into crazed maniacs. What's left of humanity and the military are holed up in underground bunkers, whilst scientists search for a cure, or at the very least an innoculation against the disease.

Scientist Morgan (Matt Smith) has found that not only is he immune to the virus, but can communicate with the infected. And the other scientists are using him in the hope that they can discover where the outbreak first occured, in the hopes of tracking down the first infected person and maybe find a cure.

But problems occur when he meets a super intelligent infected, calling himself "The Proffessor" (Stanley Tucci - Captain America, The Hunger Games) and finds that they have their own Patient Zero they have been searching for...

Also starring Natalie Dormer (Game of Thrones), this was a very good action thriller, with some interesting ideas. Despite being somewhat derivative of 28 Days Later and Day of the Dead (complete with an unhinged military commander). Which makes the most of the underground complex location its set in.

There's some good action scenes towards the end and a few nice gore scenes, though it did kind of feel like an episode for a TV series. But don't let that put you off. If you enjoy zombie/infection type films, give it a go!