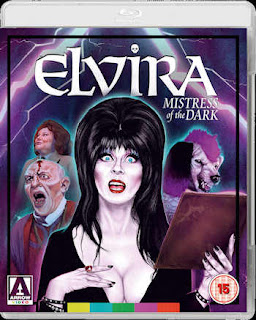 Making it's UK Special Edition Blu-Ray debut this December from Arrow films. She’s back! Elvira, Horrorland’s hostess with the mostest, finally busts out on Blu-ray with this long-awaited, positively-bursting-at-the-seams special edition of her big screen debut, Elvira: Mistress of the Dark!

Having just quit her job as a Los Angeles TV horror hostess, Elvira receives the unexpected news that she’s set to inherit part of her great-aunt Morgana’s estate. Arriving in the small town of Fallwell, Massachusetts to claim her inheritance, Elvira receives a less than enthusiastic reception from the conservative locals - amongst them, her sinister uncle Vinny, who unbeknownst to Elvira, is an evil warlock who secretly schemes to lay his hands on the old family spellbook for his own nefarious ends…

Campy, quirky and stuffed to the brim with more double entendres than your average Carry On movie, 1988’s Elvira: Mistress of the Dark helped solidify the horror hostess (played by Cassandra Peterson) as a major pop culture icon, here owning every inch of the screen with her quick wit, sass, and of course, cleaving-enhancing gown!

SPECIAL EDITION CONTENTS
-Brand new restoration from a 4K scan of the original interpositive
-High Definition Blu-ray (1080p) presentation
-Original Uncompressed Stereo 2.0 audio
-Optional English subtitles for the deaf and hard of hearing
-Introduction to the film by director James Signorelli
-2017 audio commentary with director James Signorelli, hosted by Fangoria Editor Emeritus Tony Timpone
-2017 audio commentary with Elvira Webmaster and judge of US TV show The Search for the Next -Elvira Patterson Lundquist
-Archival audio commentary with actors Cassandra Peterson, Edie McClurg and writer John Paragon
-Too Macabre - The Making of Elvira: Mistress of the Dark - newly-revised 2018 version of this feature-length documentary on the making of the film including interviews with various cast and crew and rare never-before-seen archival material
-Recipe for Terror: The Creation of the Pot Monster - newly-revised 2018 version of this featurette on the concept and design of the pot monster, as well as the other SFX of the movie
-Original Storyboards
-Original US Theatrical and Teaser Trailers
-Reversible sleeve featuring original and newly commissioned artwork by Sara Deck


FIRST PRESSING ONLY: Collector’s booklet featuring new writing on the film by Patterson Lundquist and a short note on the 2012 audio commentary by Sam Irvin