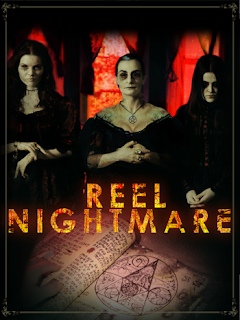 A group of film makers encounter ghostly goings on at a remote country house in Armand Petri's REEL NIGHTMARE which is out on VOD and BD this month.

Set in the fictional rural backwater of Miskatonic county (see what they did there?), a group of student film makers go to make a film about a family who were executed for witchcraft many years ago at this remote house out in the countryside (which looks in remarkably good condition for a house thats been abandoned for years)

But when someone sabotages their cars, rendering them undriveable, they find themselves stuck in the middle of nowhere. With no mobile phone signal and with night time coming, they are forced to bed down there for the night, which is where things get weird.

Strange images appear on the film makers cameras, strange whispering sounds can be heard in the background. Then someone finds an ancient spell book in the cellar, which they make the mistake of reading from, and then people start dieing in very peculiar circumstances.

Aping the basic plots of Evil Dead and Poltergeist, the film is initially presented as a “found footage” movie, but for the most part appears to be filmed like a regular film.

Being a low budget film, the acting is average, which is what you would expect. It’s competently shot and the soundtrack was fairly effective, but my main gripe is that the film was just way too slow.

Clocking in at 1hr:15, its not overly long, but most of the films run time is spent just showing the crew wandering round the house, setting up shots, talking about the history of the place and not much else. The book doesn’t come into the film until about the 40min mark and even then, there are these really long periods where nothing much seems to happen.

To summarise, this is the sort of film I can only recommend to lovers of low-budget indie horrors.

The film has been released on Digital HD in the UK, US Germany and Japan via Amazon. A Blu-Ray is also available direct from the official website.