Arrow Academy to release THE UNTAMED. 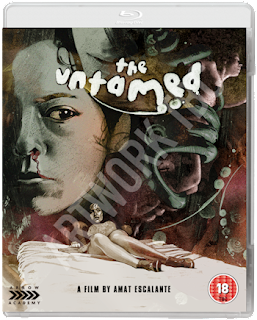 Amat Escalante’s highly acclaimed mix of Lovecraftian sci-fi and social commentary was only released in 2016 but has already won cult status. Arrow Academy brings The Untamed to UK DVD and Blu-ray with a selection of special features, plus new writings on the film with the Blu-ray edition this May.

Alejandra is a housewife, raising two boys with husband Angel in a small city. Her brother Fabian works as a nurse in a local hospital. Their provincial lives are upset with the arrival of the mysterious Veronica. Sex and love can be fragile in certain regions where strong family values, hypocrisy, homophobia, and male chauvinism exist. Veronica convinces them that in the nearby woods, inside an isolated cabin, dwells something not of this world that could be the answer to all of their problems. Something whose force they cannot resist and with whom they must make peace or suffer its wrath.

Escalante’s film mixes Lovecraftian science fiction with social commentary as he tackles themes including corruption and social injustice, a mix that has won acclaim including the Silver Lion at the prestigious Venice Film Festival and Best Director at Austin’s Fantastic Fest.
SPECIAL EDITION CONTENTS

Blu-Ray First pressing only: Booklet featuring new writing on the film by critic and author Alexandra Heller-Nicholas, writing by critic Jonathan Romney, the director’s statement and extracts from the press book, illustrated with original stills.

The Untamed is released to UK DVD and Blu-ray May 22.