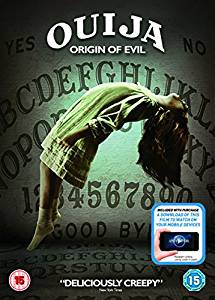 A fraudulent psychic comes to regret her choice of board game in director Mike Flanagan's ("Oculus", "Before I Wake") prequel "Ouija : Original of Evil". Which is out now on UK DVD and BD from Universal pictures.

Set in 1967, some 50 years prior to the events of "Ouija", widow Alice Zander (Eliabeth Reaser – TVs Grey’s Anatomy, The Good Wife) is struggling to make ends meet by doing bogus psychic readings for gullible folk, with the help of her 2 daughters.

When one of her daughters suggests adding a Ouija board to the séances, she figures it wouldn’t do any harm (and why would it, they’re made by Hasbro aren’t they?). Having bought one from a novelty shop, things initially seem to go quite well and they have a string of happy customers.

But it isn’t too long before things (predictably) go awry. As the younger daughter, Doris, claims she can talk to her dead father through the board. Then people who she dislikes meet with strange and unfortunate accidents and she begins writing out her homework in various foreign languages.

Things really go wrong when the local preist, Father Hogan (Henry Thomas – "Psycho 4 : The Beginning" and yes, the guy who played Elliot in "ET") comes to visit and they realise too late there are some things that shouldn’t be messed with (perhaps she should have bought that Hungry Hungry Hippos game instead?).

Making-of special (8:50) - The Director, cast and crew discuss the making of the film

Home is Where the Horror (4:30) - A look at how they designed the Zander house to give it an authentic creepy, 60s feel.

The Girl Behind Doris (3:50) - The director discusses the casting of Lulu Wilson in the role of young Doris

Deleted Scenes (16:24) - Lastly there are 7 deleted scenes, which were cut from the main feature for either time or pacing reason.

I was sent the DVD to review, however the Blu-Ray contains the exact same extras on.

If you enjoyed "Ouija" you should enjoy this sequel/prequel, which proves to be equally chilling.

"Ouija : Origin of Evil" is out now on UK BD and DVD. The film is also available in a Double-pack box set with "Ouija".


Buy the UK BD from Amazon.co.uk