"Ouija: Origin of Evil" - comes to UK Disc and Digital 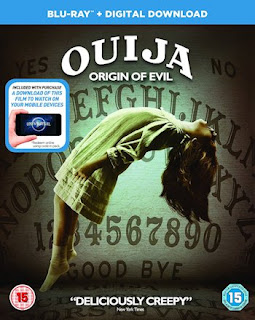 The chilling prequel to the horror hit "Ouija" invites audiences again into the lore of the spirit board when "Ouija: Origin of Evil" arrives on Digital Download on 13th Feb and on BD, DVD and VOD on 27th Feb from Universal Pictures Home Entertainment.

A two movie collection including both the original Ouija and Ouija: Origin of Evil will be released on BD and DVD on the same date.

Set 50 years prior to the events that took place in Ouija, director and writer Mike Flanagan (Oculus, Before I Wake) tells a terrifying new tale as a grieving spiritualist mother and her young daughters discover the buried dangers of an ancient game. With exclusive bonus content including deleted scenes, a character spotlight, a behind-the-scenes look at the making of the film, and more, "Ouija: Origin of Evil" delivers spine-tingling chills to viewers.

In 1967 Los Angeles, Alice (Elizabeth Reaser, The Twilight Series, Young Adult), a widowed mother and her daughters Paulina (Annalise Basso, Captain Fantastic) and Doris (Lulu Wilson, “The Millers”), add a new stunt to bolster their séance scam business when Alice brings home a sinister Ouija board. Breaking a cardinal rule of the game while desiring to communicate with their deceased father, the family inadvertently conjures a malevolent force, unleashing a terror to be reckoned with. As the youngest daughter is overtaken by the merciless spirit, this small family confronts unthinkable fears with the help of a priest (Henry Thomas, Psycho 4 : The Beginning, E.T The Extraterrestrial) to save her and send her possessor back to the other side.

·Deleted Scenes
·The Making of Ouija: Origin of Evil: Filmmakers and cast discuss their approach to making Ouija: Origin of Evil more than a horror movie
·Home is Where the Horror Is: An examination of how the Zander house added to the chilling tone of the film.
·The Girl Behind Doris: Director/Co-Writer/Editor Mike Flanagan and cast discuss finding and working with Lulu Wilson.
·Feature Commentary with Writer/Director/Editor Mike Flanagan