HorrorCon are thrilled to announce that Linda Hayden will be attending HorrorConUK 2017 on the 13th & 14th May! 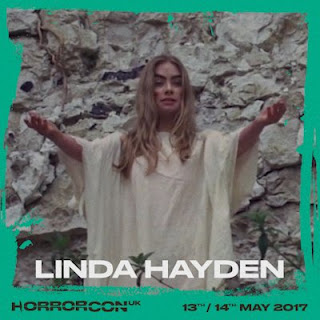 Hayden made her film debut at the age of 15 in the controversial Baby Love (1968), playing a schoolgirl who seduces her adoptive family!

She then went on to appear in two classic English horror films; she played Alice Hargood alongside Christopher Lee's Count Dracula in Hammer's Taste the Blood of Dracula, (1970). Soon after, Hayden portrayed the demonically possessed Angel Blake in Tigon's The Blood on Satan's Claw (1970).

In 1974, she appeared alongside her then boyfriend Robin Askwith in the well-liked sex comedies Confessions of a Window Cleaner (1974), and Confessions from a Holiday Camp (1977).

In 1976, Hayden starred with Udo Kier in Expose (1976), also known as Trauma in the States and House on Straw Hill in Australia, and was banned in the UK as a video nasty making the DPP 39 list.