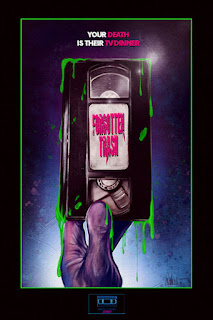 A recent film school graduate stumbles across an alien in the woods who convinces him to help with an intergalactic television show. Little does he know that the extraterrestrial entertainment involves traveling from planet to planet and killing the inhabitants.

Forgotten Trash is written and directed by Brandon Espana, whose passion for filmmaking bleeds into the storyline along with social commentary regarding media consumption. Connor McDonald and Steve Kasan (Lifechanger, Dark Side of the Ring) star.

Rather than adding digital effects, Espana shot the movie on a MiniDV camcorder then transferred it to VHS to capture the grainy visuals. It plays like a genuine relic rather than a pastiche of tongue-in-cheek nostalgia.

"I wasn't trying to make something self-referential," Espana explains. "It was always intended to be a straightforward, low-budget genre movie that draws influence from '70s and early '80s regional horror."

Clocking in at just shy of an hour, Forgotten Trash is a brisk throwback to the halcyon days of VHS. It's accompanied by the ghastly short film The Apparition and Ms. Delware.

Forgotten Trash can be purchased digitally, along with Espana's other shot-on-video horror film Stir Crazy, via Google Form.