New releases coming to Disc from Arrow Video next January.... 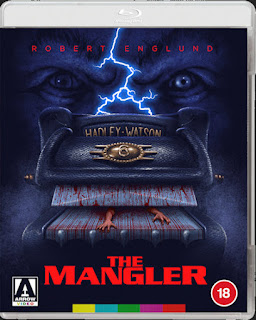 Master of Horror Tobe Hooper (Texas Chainsaw, Salem’s Lot, Life Force) returns to the works of Stephen King with this baroque and blackly comic adaptation of The Mangler.

When a worker at Gartley’s Blue Ribbon Laundry is pulled into the titular laundry press and folded like a sheet, police officer John Hunton (Ted Levine - Silence of the Lambs, Hills Have Eyes [2005] ) is called to investigate. Was it an accident, or is something more sinister going on?

As more deaths and injuries occur under the watchful eye of owner Bill Gartley (Robert Englund - A Nightmare on Elm Street), Hunton, with his demonologist brother-in-law Mark Jackson (Daniel Matmoor - Night Terrors) come to believe the machine might be possessed, and the town itself to be hiding a much deeper secret.

Like an EC horror comic come to life, THE MANGLER is bold, brash and politically aware as Hooper once again points his camera at the American Nightmare, this time turning it on the bloodthirsty machinery of capitalism itself! 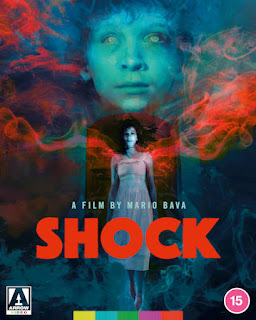 Dora (Daria Nicolodi, Deep Red, Tenebrae) moves back into her old family home with her husband, Bruno (John Steiner - Tenebrae, Caligula), and Marco (David Colin Jr. - Beyond the Door), her young son from her previous marriage.

But domestic bliss proves elusive as numerous strange and disturbing occurrences transpire, while Dora is haunted by a series of nightmares and hallucinations, many of them involving her dead former husband. Is the house itself possessed? Or does Dora’s increasingly fragile grip on reality originate from somewhere far closer to home?

Directed by Mario Bava (Black Sabbath, Blood and Black Lace) and released in the United States as Beyond the Door 2, SHOCK more than lives up to its name, proving that, even at this late stage in his career, Bava hadn’t lost his touch for terror. Now restored in high definition for the first time, the Maestro of the Macabre’s chilling swansong disturbs like never before in this feature-laden release from Arrow Video.

FIRST PRESSING ONLY: Illustrated collector’s booklet featuring new writing on the film by Troy Howarth, author of The Haunted World of Mario Bava

Also available in a BEYOND THE DOOR 2 slipcase. 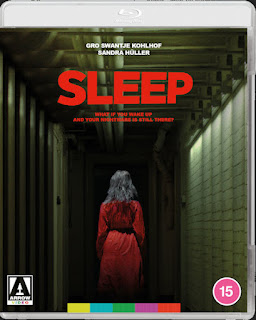 Tormented by recurring nightmares of a place she has never been, Marlene (Sandra Hüller, Requiem) cannot help but investigate when she discovers the place is real. Once there, she suffers a breakdown and is admitted to a psychiatric ward. Determined to discover what happened to her, Mona (Gro Swantje Kohlhof), her daughter, follows and finds herself in Stainbach, an idyllic village with a dark history.

What is it that so tormented her mother, and the people of Stainbach? What is the source of the nightmares she suffers? And who is the mysterious Trude that lives in the forest?

Richly conceived and confidently told, director Michael Venus draws influence from Mario Bava, David Lynch, Franz Kafka and the Brothers Grimm, but his voice is uniquely his own. As invested in substance and story as he is in style, Venus claws his way down to the roots of what haunts a people, a community, a nation and comes up screaming. “Will definitely keep you up at night” - Joey Keough, Wicked Horror