Arrow to premiere Giallo THE LAST MATINEE Online and on Disc 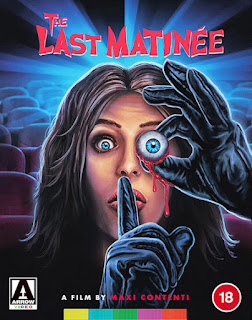 On December 1st 2021, the essential, alternative streaming service ARROW premieres THE LAST MATINEE, a stylish neo-giallo love letter to classic slashers that will send your popcorn flying and have you diving behind your seat!

Uruguayan director Maxi Contenti marks himself out as a talent to watch with a film that is a killer time at the movies! The film will also be released on Limited Edition Blu-ray, including six short films by Contenti, as well as a collectors’ booklet and a fold-out poster, on December 6th.

With lavish retro visuals, inventive and unexpected kills, buckets of grisly gore, a throbbing synth-drenched score, and a superb setting in a fleapit cinema, this is a fright-film lover’s dream - a blend of 80s slasher with Argento giallo, replete with a black-hooded, eyeball-plucking killer and a final girl, Luciana Grasso, you’ll be cheering for. THE LAST MATINEE ticks all the right boxes for devoted horror hounds: it’s Demons, Halloween, StageFright, Popcorn, Opera and Drive in Massacre all rolled into one superbly sinister reel and projected for your delight.

ARROW’s exclusive presentation of THE LAST MATINEE will include the following extras:

An audio Commentary with Director Maxi Contenti
Behind the scenes footage
A VFX featurette exploring the special effects of the film
An interview with director Contenti
Killer Attractions: Maxi Contenti & Ricardo Islas in Conversation - A discussion between the film’s director and star Ricardo Islas, director of Frankenstein: Day of the Beast
At the Premiere - A featurette on the film’s premiere
The Matinee Massacre - A three part series of ‘mockumentary’ shorts exploring the events of the movie as if they really happened
Trailer

Synopsis:
A cold, wet day. A declining cinema. All you want is to get out of the rain and watch a good film. But who else is in there, hiding in the dark? When Ana takes over projection duties from her ailing father, she doesn’t expect anything worse than a broken reel or a burned-out bulb. But there’s a sadistic killer in the auditorium, and soon blood is running in the aisles as he starts picking off the audience members one by one. Can Ana and the few remaining survivors escape the murderous madman, or will they be victims of his matinee massacre?

THE LAST MATINEE will premiere on the alternative streaming service ARROW 1st December.

THE LAST MATINEE will also be released on Limited Edition Blu-ray on 6th December.