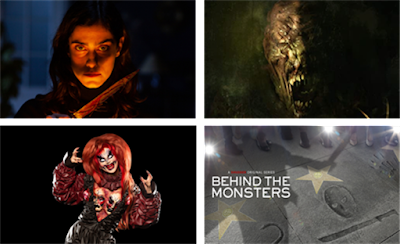 Eva (Eugénie Derouand, Paris Police 1900) has been paraplegic for the past three years. When her birthday arrives, she receives a strange advent calendar as a gift. But instead of the traditional sweets, every day reveals something different; sometimes pleasant but often terrifying, and increasingly bloody. It's going to be a very deadly Christmas this year. Written & Directed by: Patrick Ridremont

A group of battle-weary guns for hire are commissioned to rescue an imprisoned scientist from a secret Cold War bunker. Upon entering the facility, they find themselves in a fight for survival when they come under attack from a terrifying creature of unknown origin. Stars Jeremy Ninaber (Extraction Day), Ethan Mitchell (Transference: Escape the Dark), newcomer Kristen Kaster and Matthew Ninaber (PG: Psycho Goreman).

BEHIND THE MONSTERS - Shudder Original

Behind the Monsters takes an in-depth exploration of the creation of favorite horror icons including Candyman, Chucky, Michael Myers and Freddy Krueger. No horror icon came out of a filmmaker’s first draft fully formed. There were early drafts, wrong turns, experimentation. Once made flesh (or latex), there’s presentation, impact, audience response and legacy. The final episode in the series examines the terrifying Pinhead, Lead Cenobite from the Hellraiser franchise. Series includes interviews with Doug Bradley (Hellraiser), Virginia Madsen and Tony Todd (Candyman), Nick Castle (Halloween) and many others.

The “Ghoul Log” is back with a special holiday edition, combining a traditional Yule Log with Shudder’s own Christmas “Ghoul Log,” wishing all of Shudder’s members a very spooky Christmas and a scary New Year.

In 19th century Holland, a professor of fine arts and an unlicensed surgeon run a secret lab where the professor's ill daughter receives blood-transfusions from kidnapped female victims who posthumously become macabre art.

After her father dies, teenager Leah is forced by her unstable mother to leave her friends behind and move to a house in the woods. Feeling isolated and hopeless, Leah turns to Black Magic to release her anger. She naively performs an occult ritual found in a book on her bedroom shelf to invoke the spirit of a witch to kill her mother. Terrified by strange occurrences and stricken by guilt, Leah desperately tries to reverse the spell but soon realizes she has awoken something in the woods... and nothing can prepare her for the terror that has been unleashed.

After years of abuse at the hands of tyrannical nuns, Billy has finally flipped. Dressed as St. Nick, the teenager heads back to the oppressive orphanage of his childhood to exact his bloody revenge, ‘punishing’ anyone who gets in his way.

Oh, it's Garbage Day in this notorious cult sequel to the essential Santa slasher. Carrying the terrifying memory of his brother Billy's death, Ricky is released from an asylum, ready to continue the family tradition of Christmas carnage.

As their small Midwestern town prepares for its annual Christmas Eve parade, Sheriff Cooper and his deputy discover that a maniac in a Santa suit is murdering those he judges as 'naughty.'

SCREAMS OF A WINTER NIGHT

An anthology in which a group of college coeds spending a winter's night in a remote cabin pass time by telling scary stories to each other.

After five deranged children are involved in a bus wreck, they start killing people at the lodge who insulted them or were rude to them.

A newly-married young woman, Pirita, becomes frustrated and lonely as her husband, a reindeer herder for a small Arctic village, spends much of his time away from home in devotion to his work. Desperate for affection, she visits a shaman who offers a potion that makes her an irresistible object of desire, but there is a terrible cost. Pirita becomes a bloodthirsty shapeshifter who lures men out into the barren wilderness where she consumes them

JOHN DIES AT THE END

Two college dropouts must save the world from the effects of a very freaky street drug which sends users traveling across time and to other dimensions. When the users return, some of them are no longer human. Suddenly, a silent, otherworldly invasion is underway, and mankind needs a hero. What it gets instead is John and David who can barely hold down jobs. Can they stop the horror and save humanity? No. No, they can't.

THE TERROR - SERIES ONE

Haunting, suspenseful and based on true events, The Terror’s first season centers on a perilous Arctic voyage by the British Royal Navy. It’s an extreme tale of survival in a wholly unforgiving landscape – with the crew's fears exacerbated by an unknown threat.

The leader of an inner-city girl gang is challenged when a new girl moves into the neighborhood.

In this twisted cult horror-comedy, deranged siblings torment unfortunate visitors. Elizabeth, Virginia and Ralph all suffer from Merrye's Syndrome, which causes them to regress to a state of “pre-human savagery and cannibalism.” Normally, they're kept in line by their chauffeur, but when he steps out, things turn terrifying.

Hard-drinking, pill-popping, bong-ripping Lou and her best friend, Sadie, spend their days adrift in a drug-induced haze. But one wild night out becomes a bad trip that never ends when Lou wakes up with symptoms of an unexplained, highly abnormal pregnancy. As her due date approaches with alarming swiftness, the fear, paranoia and conspiracy theories begin to pile up about the pregnancy.

BIRTH OF THE LIVING DEAD

In 1968, a young college dropout named George A. Romero gathered an unlikely team – from Pittsburgh policemen, iron workers, housewives and a roller rink owner – to create a low-budget horror film that would revolutionize the industry and spawn a new flesh-eating monster that endures to this day. That film was Night of the Living Dead. Birth of the Living Dead is the story of how they managed to pull off the greatest guerrilla shoot of all time.

A family's Christmas takes a strange turn when they awake to find themselves trapped inside and begin receiving mysterious instructions through the television.

MY HEART CAN'T BEAT UNLESS YOU TELL IT TO

Two mysterious siblings find themselves at odds over care for their frail and sickly younger brother.

He is nine years old. His name is Thomas. He is a little genius. He believes in Santa Claus. His two favorite pastimes: computers and superheroes. December 24th, midnight. Hidden under the dining-room table, Thomas waits for Santa Claus. But what he doesn’t know is that he is about to experience the most frightening night in his entire life.

In this stark and atmospheric tale, Gwen is a young girl struggling with her mother’s mysterious illness, her father's absence and the suspicious local community that has turned on them. Somehow, Gwen must find the strength to guide her family through the darkness and overcome the evil that is taking grip of her home.

When meth-addict Milton is sprung from rehab by psycho couple Russell and Skyler, he’s brought to a cabin and ordered to cook up 85 pounds of meth. After a disagreement, Milton and Skyler kill Russell, but he just won’t stay dead, and each morning, the pair must kill him again. Milton realizes they’re in a time loop that has something to do with an ancient Native American curse – but how to escape it, that’s the real question.

ABOUT SHUDDER - AMC Networks’ Shudder is a premium streaming video service, super-serving members with the best selection in genre entertainment, covering horror, thrillers and the supernatural. Shudder’s expanding library of film, TV series, and originals is available on most streaming devices in the US, Canada, the UK, Ireland, Germany, Australia and New Zealand. For a 7-day, risk-free trial, visit www.shudder.com