2.22 A GHOST STORY - Transfers to the Gielgud theatre, for limited 10 week run, December.

Producer Runaway Entertainment is delighted to announce that the edge-of-your-seat, supernatural thriller 2:22 - A GHOST STORY returns for a new season at the Gielgud Theatre.

After breaking all box office records for a new play at the Noel Coward Theatre; described as the theatre event of the year and the hottest ticket in the West End; and after weeks of sell-out performances, the show will play at the Gielgud Theatre for ten weeks only until 12 February 2022. The all new star cast will be announced soon.

2:22 - A GHOST STORY is written by award-winning writer Danny Robins, creator of the hit BBC podcast The Battersea Poltergeist and it is directed by Matthew Dunster. Intriguing, funny and scary, it takes audiences into one adrenaline fueled night where secrets will emerge and ghosts may appear….What do you believe? And do you dare to discover the truth?

“There’s something in our house. I hear it every night, at the same time.”

Jenny believes her new home is haunted, but her husband Sam isn’t having any of it. They argue with their first dinner guests, old friend Lauren and her new partner Ben. Can the dead really walk again?

Belief and scepticism clash, but something feels strange and frightening, and that something is getting closer, so they are going to stay up… until 2.22am… and then they will know.

Danny Robins said "I was blown away by the response to the play this summer, both from the critics and our amazing audiences, so I am hugely chuffed to be able to bring the show back so quickly and to this beautiful, historic theatre. Slipping from Autumn into Winter, it feels the perfect time for a ghost story, so I can’t wait to spook a whole load of new audiences at the Gielgud. I’m hoping you’ll laugh, jump, be on the edge of your seat, and then spend the rest of the night talking about whether ghosts exist!”

2:22 - A GHOST STORY is produced by Tristan Baker and Charlie Parsons for Runaway Entertainment, Isobel David and Kater Gordon.

2:22 - A Ghost Story
By Danny Robins
Directed by Matthew Dunster 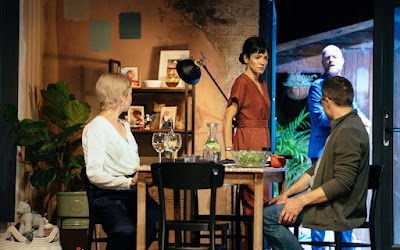