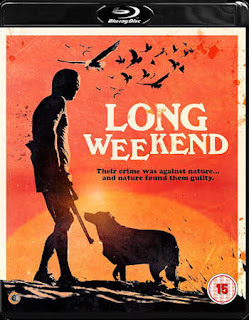 Nature wreaks its revenge when a couple’s careless behaviour causes havoc in the Australian wild, in the Long Weekend.

This 1978 Ozploitation classic from director Colin Eggleston (Innocent Prey), heads to Blu-ray for the first time in the UK with an extras-laden package courtesy of Second Sight on 5 November 2018.

Peter (John Hargreaves – Country Life) and Marcia’s (Briony Behets – Prisoner Cell Block H), relationship is on the rocks, so they head to the wilderness for an away from it all, make or break long weekend.

But in their wake, they leave a trail of destruction – animals run over and tormented, their dog uncared for at home and fires started by their carelessness. They destroy both the countryside around them and any animal or creature that crosses their path…

So Mother Nature strikes back as the creatures and weather take vengeance against the thoughtless, unpleasant pair.
The Blu-ray features audio commentary with executive producer Richard Brennan and Cinematographer Vincent Monton, as well as Nature Found Them Guilty: Examining Long Weekend, a panel discussion with film historians.
Prepare for a severe weather warning in Long Weekend.