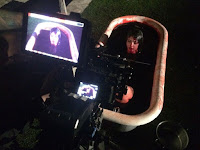 The film, which is a twist on the classic Blood Countess Bathory myth, sees musician and actor Jeordie White (AKA Twiggy Ramriz from Marilyn Manson, Nine Inch Nails and A Perfect Circle),  star as the lead role of Marv along with Pandie Suicide as Liz, actress Kimberly Ables Jindra (Insidious), and features a cameo appearance from Slipknot DJ, Sid Wilson (aka DJ Starscream).
The four minute short film is intended to be released online, free to the public and features beautiful cinematography from DP Evan Pesses, and bloody special FX from make up FX artist and Face Off! alumni Laney Chantal. The film is expected to be released in late April online with a special premiere event being planned for Los Angeles, California. To find out more visit the film co's official site at http://www.deathaus.com