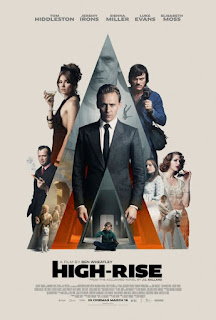 "High-Rise", the new thriller from director Ben Wheatley (Kill List, Sightseers), hits UK cinemas March 18th. I managed to attend a special preview screening, with the director in attendance, a couple of weeks prior, at the Broadway cinema in Nottingham, which had been organised by the people behind the city’s popular Mayhem festival.

Set in the 70s, Tom Hiddeston (Loki from Thor and Avengers Assemble) plays a young doctor who's just moved into a swanky new high-rise apartment building on the outskirts of London, which claims to boast all the latest mod-cons.

But all is not well there, the residents on the lower floors are fed up with the constant power cuts and water outages which seem to be getting more frequent. But what particularly irks them is these problems don't seem to effect the flats on the upper levels, which are inhabited by the wealthy residents.

With these and other problems, such as clogged waste chutes, becoming a daily occurrence and the wealthy residents trying to exclude the others from the recreation areas. The folk on the lower levels start rebelling and doing all they can to annoy the more affluent tenants. But what starts as a simple game of "one-upmanship" descends, quite literally, into "class warfare". As the tenants on the upper and lower levels split into tribes and start fighting each other for control over supplies in the supermarket and the building's public areas.

Based on the book of the same name by JG Ballard, this is a very, VERY, bizarre film, which was kind of a cross between Shivers and Lord of the Flies, as the tenant’s behaviour becomes increasingly erratic the longer they all stay cooped up in the building.

A good film, though what I couldn't understand is if the power was out, why someone didn't just ring the electricity board? When the building's supermarket starts to run out of supplies, there was nothing stopping anyone from just going to the shops down the road, as they weren't locked in the building. Some people were still going to work, rather than manning the barricades or looting each day, so why didn't people just leave?

To be fair, I enjoyed the film, but its story was just so damn bizarre it’s a difficult movie to categorise.

The film is released to UK cinemas March 18. See it for yourself and see what you make of it.

Checkout this Q&A with director Ben Wheatley and cinematographer Laurie Rose which followed the Nottingham screening.