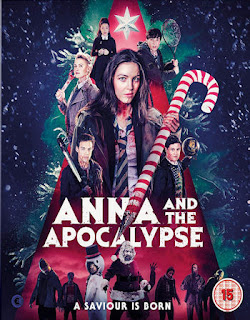 What better way to celebrate the festive season than with a zombie apocalypse Christmas musical? Anna and the Apocalypse ‘A delightful Christmas/horror/comedy/musical hybrid, with a great cast and entertaining gore’ (IGN) directed by John McPhail (Where Do We Go From Here) is set for its UK Blu-ray debut on 2 December in a feature packed double-disc edition, courtesy of Second Sight.

It’s Christmas time and the sleepy Scottish town of Little Haven is under threat from a zombie apocalypse, forcing Anna (Ella Hunt – Cold Feet) and her friends to fight, slash and sing their way to survival, facing the undead in a desperate race to reach their loved ones. But even zombies can’t stop the teen drama: will Anna’s best friend John (Malcolm Cumming – Long Lost) reveal his true feelings for her, or will her smug ex Nick (Ben Wiggins – Mary Queen of Scots) win back her affections? And will she be able to repair her rocky relationship with dad Tony (Mark Benton – The Second Coming) before it’s too late?

Along with exchange student Steph (Sarah Swire – God Help the Girl), star singer Lisa (Marli Siu – Grantchester) and her crush Chris (Christopher Leveaux – Forgotten Man), Anna soon discovers that no one is safe in this new world, and with civilisation falling apart around them, the only people they can truly rely on are each other. Deck the halls with brains and holly for an all singing, blood-spattered festive zombie romp.