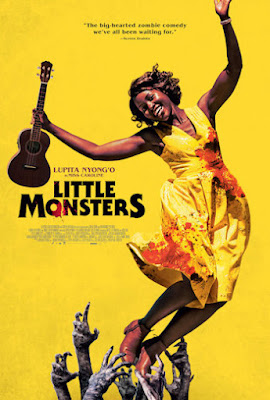 Dave’s intentions are complicated by the presence of the world’s most famous kids’ show personality and competition for Miss Caroline’s affections, Teddy McGiggle (Josh Gad FROZEN).

One thing none of them bargained for, however, is a sudden zombie outbreak. Will Dave rise to the occasion and have a chance at Miss Caroline’s heart, or will zombies get there first?

Described as a ‘must-see horror comedy’ by We Got This Covered, and ‘an amusing thrill-ride’ by Screen International, Sundance Hit LITTLE MONSTERS is a smart, sharp and deliciously gruesome zom-com that will appeal to fans of the Zombieland films, What We Do in the Shadows and Happy Death Day. Doused with a generous helping of absurdity, pitch-perfect timing, and a nifty blend of gore and wit, it’s a wild, frenetic ride.

Award-winning writer/director Abe Forsythe has struck gold with his cast - Lupita Nyong’o is currently the horror genre’s hot ticket, following her standout performance in Jordan Peele’s Us, which played no small part in making that film a box office smash this year. Josh Gad, famous for his loveable roles in Disney films Frozen and Beauty and the Beast, is on fabulous form here playing against type.

LITTLE MONSTERS comes from the production team behind cult chillers The Guest and You’re Next, and the 2016 Blair Witch remake (as well as the forthcoming reboot of Korean revenge thriller I Saw The Devil), with special effects from the Oscar-winning studio behind Mad Max: Fury Road.

LITTLE MONSTERS will be released in UK and Irish cinemas and on Sky Cinema from 15 November.

It's also playing at a number of Festivals over the Halloween period...