Day 2 of the Mayhem Film Festival, as always, is the day they tend to squeeze in the wierder, arty films in the festival and this year certainly produced some unusual films. 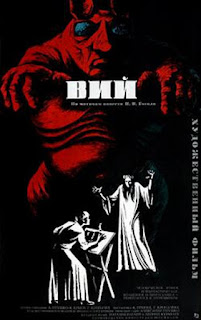 Set in medieval times, three young Russian Priests get lost whilst travelling through the countryside and end up seeking refuge at a remote farm. Unfortunately, the occupant turns out to be a witch, complete with flying broomstick (yes, REALLY) which one of the priests ends up beating to near death.

Fleeing back to their school, one of them is surprised when he finds himself summoned to a nearby village to say prayers for a recently deceased young girl. But it turns out the girl is the witch in disguise. And his task, to remain locked in the church with the body for 3 nights reciting prayers, ends up being a battle of survival, as the young priest is forced to fend off demonic attacks each night with his prayers and incantations.

I was pleased that Mayhem screened an English dubbed version, rather than a sub-titled print and it was actually a surprisingly enjoyable film. Not one I would usually watch, but was glad that I did. The special effects for the era were extremely good and was rather like watching a 1960s version of The Evil Dead.

If you are interested in checking this out for yourself, Severin Films are planning a Blu-Ray release in the near future. 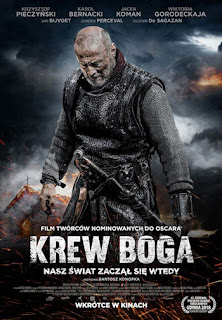 Keeping with the medieval religious theme, Polish director Bartosz Konopka’s historical drama SWORD OF GOD (AKA The Mute) was up next, making it’s UK premier.

A couple of Polish knights arrive at a remote island (not sure where, but looks kind of Scandinavian?) with the intent of converting the pagan natives to christianity.

Seems they have fallen out of favour with the king and are hoping if they can get the natives to convert, where previous christian missionaries have failed, it will curry some favour with him, as he is arriving there with an army in a few months time. And so the two set about trying to win the natives over.

Exploring themes of religious conquest and colonialism, I must admit this wasn’t really my cup-of-tea and although visually very stunning and extremely well filmed, will probably hold little interest for horror fans, being a drama.

Also, being in Polish with English subs, I found it a little hard to follow. Particularly as when the natives spoke in their own tongue, there were no subs (which I assume was intentional). Although what really threw me, was there a couple of scenes where the Polish knights suddenly started speaking English and it displayed Polish sub-titles?

The film has not yet secured a distribution deal in the UK to my knowledge, although I believe a US release is imminent.

GIRL ON THE THIRD FLOOR 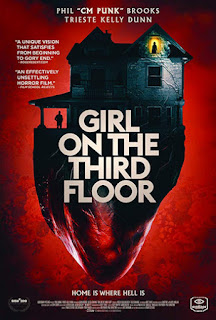 GIRL ON THE THIRD FLOOR, from Director Travis Stevens, who produced “We Are Still Here” and “68 Kill”, was the third film of the day. Which examines the pitfalls of attempting home renovation in a haunted house.

A former investment broker (played by former wrestler CM Punk), whose had some run ins with the law, hopes to make a fresh start with his wife after buying an old property in the Chicago suburbs, which he proceeds to renovate so he can move her and their upcoming child into.

But all does not go as well as planned, as he is plagued with strange noises, strange visions and even stranger visitors. Seems the house has something of a history, but these walls don’t drip blood. Instead they ooze, what looks like, a very different type of bodily fluid. I won’t say what it looks like, but the fact the house used to be a brothel many years ago may have something to do with it

Arguably my favourite film of the day, basically this was another twist on the old haunted house tale, but was a rather enjoyable one. Even though I noticed distinct similarities between this and Series 1 of American Horror Story (Murder House).

COLOUR OUT OF SPACE 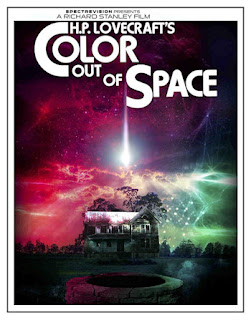 I had much trepidation as I approached the fourth film of the day, THE COLOUR OUT OF SPACE. As those who know me, will know how much I detest Nicholas Cage and the lengths I will generally go to avoid his films.

But as this marked the return of Director Richard Stanley, who’s been missing in action since his ill fated “Island of Dr Moreau” in 1996 (the on set problems were so legendary, they became subject of a documentary in 2015). I decided I’d have to bite the bullet. So after getting tanked up at the bar, settled down to watch it.

Was actually quite pleasantly surprised, I feared this would be another nonsensical arthouse pic like Cage’s previous film Mandy. But was relieved to find it was, more or less, a straight horror/sci-fi pic. With Nicholas Cage, despite receiving top billing, actually being relegated to a supporting role. With the focus being on the teenage children and a scientist from the local University.

Loosely based on a tale by HP Lovecraft, a small meteorite crashes down on farmland, where Nicholas Cage lives with his family. Soonafter, the meteor dissapears, but strange things start to affect the farm.

Strange foliage starts to grow, strange insects begin to appear, some of his farm animals begin to take on a grotesquely hideous appearance and everyone is at each others throats. But being in the middle of nowhere and with the strange alien activity also affecting their phones, TV and their car, they find themselves stuck.

Overall, I enjoyed it to a large extent, but the film just seemed to go off the rails at the end as the alien activity gets worse and things become farcical. Which seemed to be the general consensus of the audience.

Would have been MUCH better had Nic Cage not been involved, who’s hammy performance had the audience in fits of laughter. Whether this will be Richard Stanley’s big comeback remains to be seen, but a UK release is apparently forthcoming for those who are curious and can stomach Nic Cage. 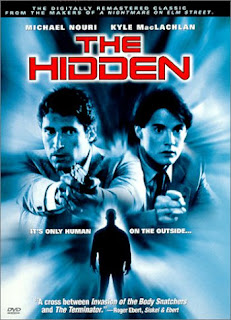 Storywise, the plot revolves around LAPD detective Tom Beck (Michael Nouri) who is trying to find out why apparently ordinary, law biding citizens are going on the rampage, robbing banks, stealing cars and killing people for fun.

Enter enigmatic FBI agent Lloyd Gallagher (Kyle MacLachlan – TVs Twin Peaks) who informs him these crimes are in fact the work of all one person and, despite outgoing appearance, they’re not human.

Filled with gun fights and car chases, as the two try and track down who, or whatever, is behind these violent robberies. This one is terrific fun and is a personal favourite of mine.

THE HIDDEN may have passed you by, indeed Friday the 13th fans may be surprised to learn that "Jason Goes to Hell" actually ripped off the central premise from this film, but proved nowere near as entertaining. So if you haven’t seen this, then I would heartily recommend it to you, as it’s tremendous fun and it was great seeing this on the big screen.

And so ended Day 2 of the Mayhem Fetsival

The Mayhem Festival is on between 10-13 October at the Broadway Cinema, Nottingham.