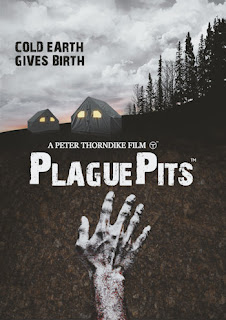 Peter Thorndike, from horror-rock band Living Dead Island, got in touch to tell us about his upcoming film PLAGUE PITS, which is about to begin filming.

Having studied film under the great Ken Russell (THE DEVILS, LAIR OF THE WHITE WORM) at Southampton Solent University.

Director Thorndike describes Plague Pits, which marks his directorial debut, as a very conscious effort to take the zombie movie back to basics and evoke the kind of primal dread - and practical SFX - present in the work of Lucio Fulci and Amando de Ossorio.

Having secured financing, a cast and crew are starting to fall into place and filming is exptected to begin shortly.

For behind the scenes images and to check out the special effects visit the film's Instagram page at  https://www.instagram.com/plaguepitsthemovie

For updates checkout the official website at www.plaguepits.com
Posted by Dark Angel at 15:24